The country's composite consumer sentiment index came to 70.8 in the month, down 7.6 points from a month earlier, according to the data from the Bank of Korea (BOK).

The reading for April marks the lowest since December 2008, but the rate of drop slowed from an 18.5-point on-month plunge posted in March.

The index has been on a steady decline since South Korea reported its first confirmed case of COVID-19 on Jan. 20.

The number of new infection cases has recently remained at around 10 or fewer after peaking at over 900 per day in late February.

Apparently helped by hope of possible containment, a subindex measuring the people's sentiment toward their own economic conditions in the future came to 79 in April, down only 4 points from a month earlier. The index had dipped 10 points from 93 to 83 in March.

The monthly index is based on a survey of 2,500 households throughout the nation, conducted from April 10-17. 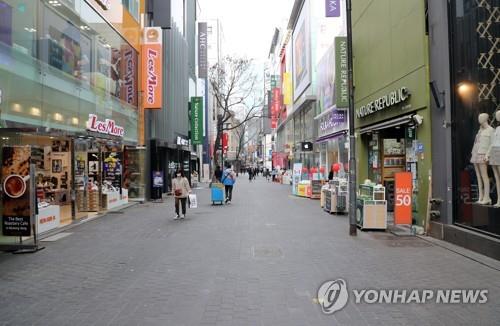