BUSAN, April 27 (Yonhap) -- Police on Monday announced the launch of an investigation into former Busan Mayor Oh Keo-don who resigned four days ago after admitting to sexual harassment.

The police agency said it will do its best to protect the victim and will take stern measures against Oh if any illegality is confirmed through a thorough investigation. 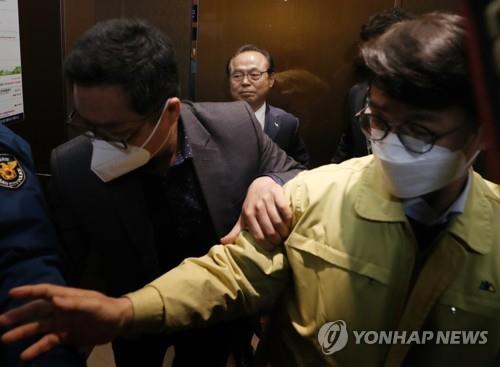 The police agency said it will first check all the facts involving Oh's sexual harassment and carefully sound out the victim's intention to testify about her damage.

The victim has yet to disclose her intention to file a complaint against Oh, apparently due to fears of secondary damage. In general, offenders in sexual violence cases are questioned after their victims make statements.

Police may call in Oh after securing testimonies from his victim, but the plan will be flexible depending on the progress of the probe, police officials said.

The Busan police agency is reportedly conducting an investigation into another sexual harassment case involving Oh, which was disclosed on a YouTube channel last October.

Oh's whereabouts have remained unknown since he held a news conference last Thursday to announce his resignation.

Oh, 72 years old, reportedly touched a female civil servant inappropriately during a recent meeting at his office. The victim had asked Oh to resign after reporting the case to a counseling center for sexual crime victims in Busan.

Oh was elected as the mayor of South Korea's second-largest city after running as a candidate of the ruling Democratic Party in the 2018 local elections.

Meanwhile, the ruling party announced its decision to expel Oh from party membership.

The party's ethics committee said it agreed on Oh's expulsion in its plenary meeting and the decision took an immediate effect.

"The decision on Oh's expulsion was unanimous because the case is grave and Oh admitted (to his act)," said Lim Chae-kyun, chief of the ruling party's ethics committee, adding the former mayor has given up explaining himself in regards to the case.