The index opened higher and continued to build up gains on hopes that the coronavirus outbreak is peaking. The country reported 10 new cases of COVID-19 on Monday, marking the fifth day in a row that the number of new infections stayed at 10 or below

The government earlier announced that an aid package will be increased to 135 trillion won from the previously set 100 trillion won to help key industries disrupted by the COVID-19 pandemic. 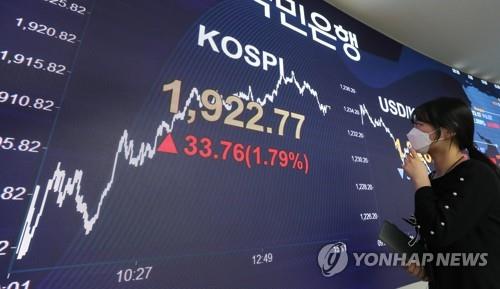 The local currency closed at 1,226.2 won against the U.S. dollar, up 9.3 won from the previous session's close.

Bond prices, which move inversely to yields, closed lower. The yield on three-year Treasurys added 0.8 basis point to 1.026 percent, with the return on the benchmark five-year government bond up 1.1 basis points to 1.288 percent.