SEOUL, April 27 (Yonhap) -- South Korea's rival parties said Monday they have agreed to vote this week on the provision of disaster relief funds to all households to minimize the economic fallout from the coronavirus outbreak.

The ruling Democratic Party and the main opposition United Future Party (UFP) agreed to hold a plenary session of the National Assembly on Wednesday to handle this year's second supplementary budget bill centered on the nationwide payment of disaster relief money totaling 1 million won (US$814) each for households of four persons.

The agreement was announced after a meeting of the two parties' first vice floor leaders at the National Assembly. 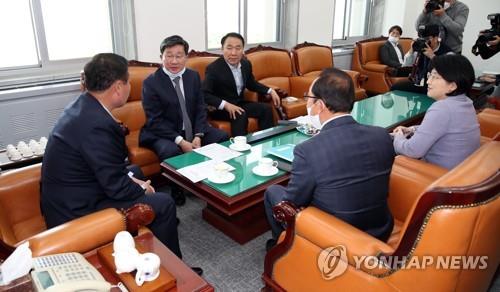 Earlier in the day, President Moon Jae-in and Prime Minister Chung Sye-kyun met at Cheong Wa Dae and agreed to devote all efforts to provide the emergency disaster relief funds as soon as possible.

The Moon administration announced at the end of March that it would grant the direct financial support to all families here except the top 30 percent by income.

The government soon submitted a 7.6 trillion-won extra budget bill to the National Assembly to fund the program.

The ruling Democratic Party has proposed expanding the scope of beneficiaries to all households amid concerns about the time and cost necessary for administrative procedures to sort out those who are eligible.