SEOUL, April 28 (Yonhap) -- Foreign ownership of South Korean stocks dipped to a 43-month low in March due to their massive sell-off and a market rout amid the coronavirus impact, data showed Tuesday.

Foreign investors held 468.7 trillion won (US$382 billion) worth of local stocks and other stock-related instruments as of end-March, down 76 trillion won from the prior month, according to the data from the Financial Supervisory Service (FSS). 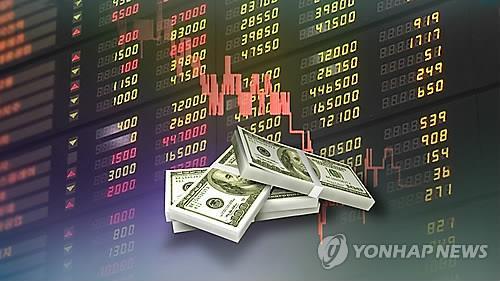 The value of stocks held by foreign investors has been on a decline this year after reaching 593 trillion won at the end of last year.

According to the Korea Exchange, institutional investors sold a net 12.9 trillion won last month and posted a 19-session selling streak beginning March 5 on the main bourse.

The benchmark Korea Composite Stock Price Index (KOSPI) plunged 11.7 percent in March from the previous month, with the price index of the KOSDAQ market dipping 6.8 percent.

Foreign ownership of South Korean stocks reached a record high in January 2018, with the value amounting to 658.8 trillion won.

In contrast to their stock selling binge, foreign holdings of listed bonds in South Korea soared to a fresh high of 133.3 trillion won at the end of March, according to the FSS data.
(END)