SEOUL, April 28 (Yonhap) -- South Korea's trade volume shrank 4.5 percent from a year ago in the first quarter of the year due to the impact of the coronavirus outbreak, government data showed Tuesday.

The volume of exports and imports handled at the country's ports came to 332.7 million tons in the January-March period, compared with 348.2 million tons a year earlier, according to the data from the Ministry of Oceans and Fisheries.

In particular, the on-year drop in trade volume widened to 4.8 percent in March from 1.7 percent the prior month, showing the fallout of the coronavirus pandemic has started to materialize, the ministry said.

The data also showed cargo processed at the ports stood at 7.14 million twenty-foot equivalent units (TEUs) in the first quarter, up a mere 0.4 percent from a year earlier.

Of the total, export-import cargo declined 0.08 percent from a year earlier to 4.04 TEUs during the three-month period. 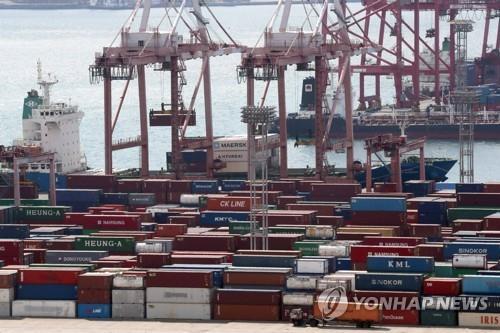