SEOUL, April 28 (Yonhap) -- The top nuclear envoys of South Korea and the United States exchanged their assessments of the situation on the Korean Peninsula in a phone call Tuesday, the foreign ministry said, amid speculation about North Korean leader Kim Jong-un's health.

The phone talks between Lee Do-hoon and his U.S. counterpart, Stephen Biegun, came as media reports about Kim's weekslong absence from the public eye spawned rumors about his health conditions despite Seoul's assessment that there was "nothing unusual" in the communist state.

"The two sides have shared assessments of the recent developments on the Korean Peninsula and exchanged their opinions on ways to cooperate between the two countries in making substantive progress in the efforts for the complete denuclearization and establishment of lasting peace on the peninsula," the ministry said in a press release.

"The South and the U.S. evaluated bilateral communication and consultations on the North Korean nuclear and other issues that have continued at each level, and agreed to continue close cooperation down the road," it added.

A diplomatic source said that both Seoul and Washington shared the assessment that there are no unusual signs regarding Kim's status.

The phone call came a day after President Moon Jae-in expressed his desire to chart a path for "realistic and practical" inter-Korean cooperation -- a goal hamstrung by global sanctions on the North.

Moon listed a series of areas for cooperation, including coping with the new coronavirus, possible disasters in border regions and climate change, and relinking inter-Korean railways.

In Tuesday's call, the South Korean nuclear envoy was believed to have explained to Biegun Moon's vision for cross-border cooperation.

Lee and Biegun last held phone talks on April 2 amid worries that the global focus on tackling the COVID-19 pandemic could slow the endeavors to bring Pyongyang back to the negotiation table. 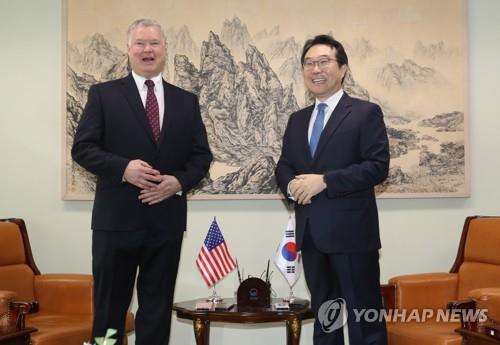