Jeju Air signed a deal to acquire a controlling 51.17 percent stake in Eastar Jet from its parent Eastar Holdings Inc. for 54.5 billion won (US$45 million) in March in its expansion strategy.

"The payment is expected to be made next month as Vietnam and Thailand have yet to approve the combination of the two carriers," a company spokesman said over the phone. The takeover plan was approved earlier this month in South Korea. 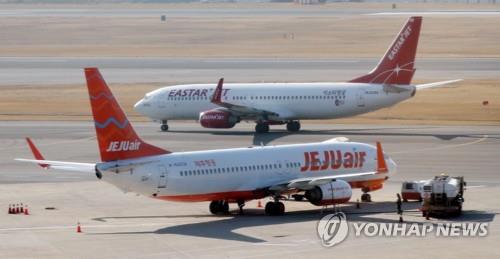 Once the two Southeast Asian countries approve the deal, South Korea's two state lenders -- the Korea Development Bank and the Korea Export-Import Bank of Korea -- are expected to inject 170 billion won into Jeju Air to help it continue operations amid the growing impact of the coronavirus outbreak.

In other efforts to ride out the COVID-19 fallout, Jeju Air said Tuesday it will raise 10 billion won by issuing convertible bonds with rights to convert into Jeju Air stocks between June 30, 2021, and May 30, 2025.

Eastar Holdings will purchase the convertible bonds to be issued by Jeju Air on June 30, and the bonds can converted into Jeju Air equities at 25,520 won per share during the four-year period.