SEOUL, May 2 (Yonhap) -- On many levels, the 2020 South Korean professional baseball season will be unlike any of the 38 that came before it.

Because of the coronavirus outbreak earlier in the spring, the start of the new Korea Baseball Organization (KBO) season was pushed back from March 28 to May 5, next Tuesday. But in announcing the new Opening Day late last month, the KBO and team presidents also said the normal, 144-game schedule will be squeezed into a tight window. The league's goal -- or hope, as is -- is to award the Korean Series championship by the end of November.

The delay to the start of the season and the public health crisis have necessitated several changes. 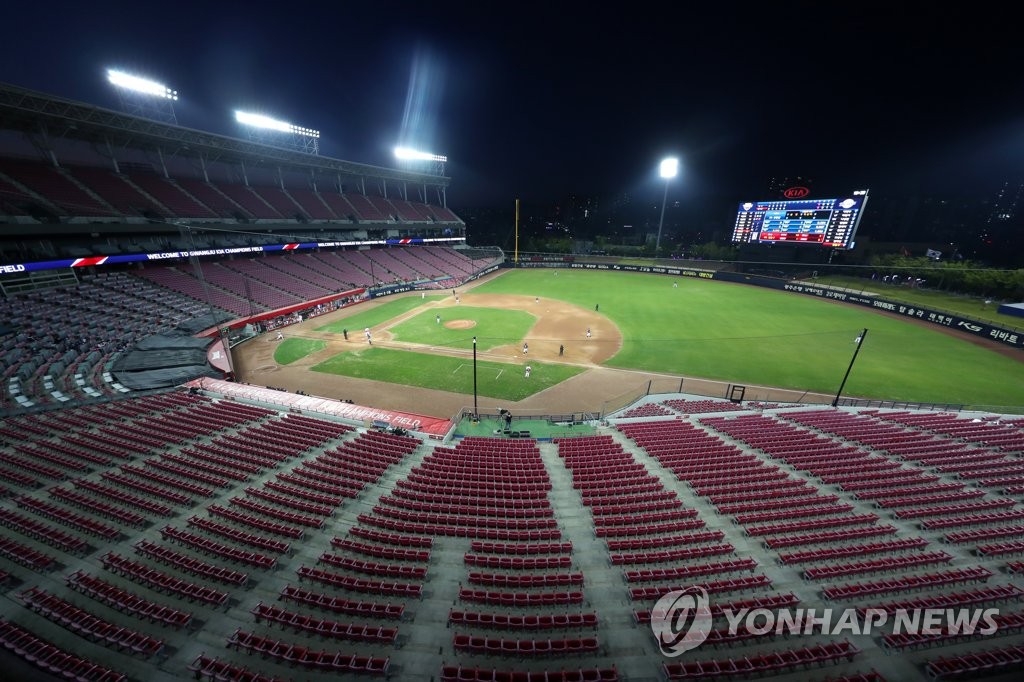 For one, there will be no fans in the stands at the start of the season. Even though the number of new daily COVID-19 cases has been on a steady decline since early April, the KBO isn't taking any chances. And there's really no way of knowing exactly when it will be safe enough for fans to start attending baseball games.

Even when it does become safe, KBO teams won't open their gates wide immediately. They will likely start selling about 20 percent of their seats and then gradually increase that number.

Teams have been playing intrasquad scrimmages and preseason games at empty stadiums for about a month, but doing so in games that count will be a whole different matter. The absence of crowd noise will still seem jarring for those who've been used to competing to loud chants from thousands of supporters.

Spitting will be strongly prohibited, and handshakes and high-fives with bare hands will be discouraged. Smokeless tobacco will be snuffed out. All umpires, bat boys or girls, and first and third base coaches must keep their masks on when they're on the field. Players and other members of the coaching staff also must wear masks in all areas of the stadium except for the dugout and the field.

Athletes, just like regular folks, are creatures of habit. During the preseason, a few players were seen on camera spitting in the batter's box or on the field, while some caught themselves at the last second. In lieu of high-fives or low-fives, teams have had to be creative to come up with new ways to celebrate home runs and other key moments of the game. 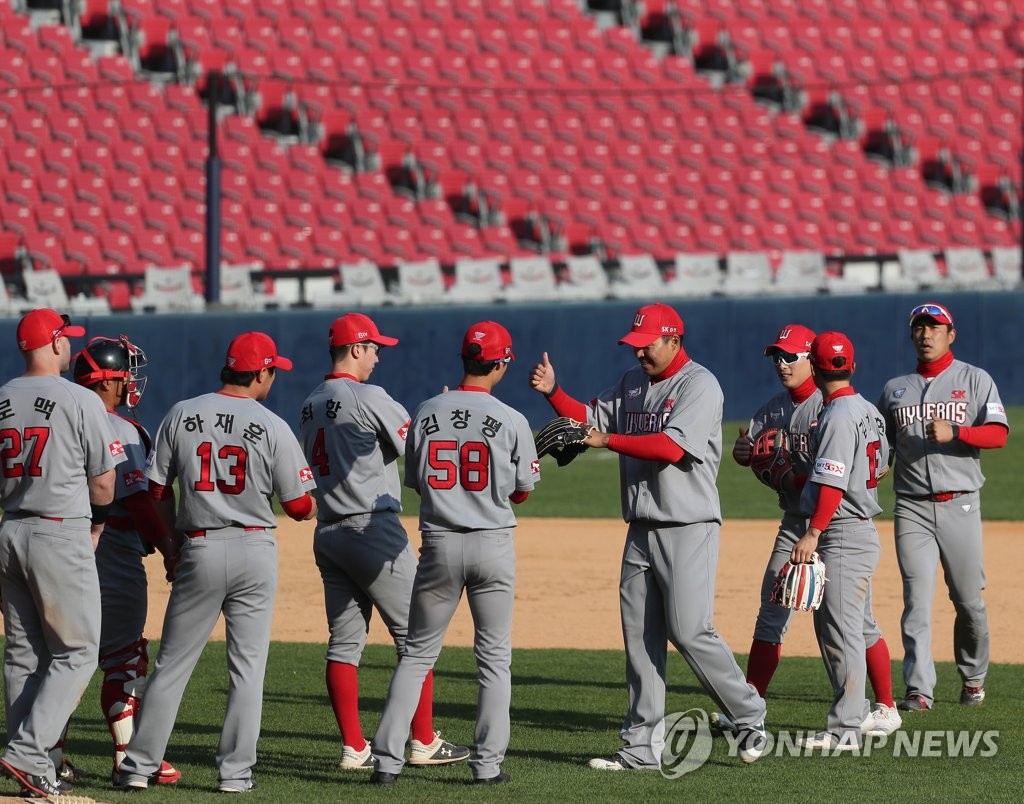 That includes multiple teams joining the "Thank You Challenge," a campaign that uses sign language -- the right hand with the thumbs-up sign placed on the palm of the left hand -- to show appreciation for the front-line medical workers during the pandemic.

With the league looking to play all 144 games in a compressed schedule, there will be doubleheaders and games on Mondays, which is an off day in a normal KBO season. There will be no All-Star Game this summer.

Half of the 10 managers have openly criticized the KBO brass for pushing ahead with the full schedule. The league has made some concessions: There will be no doubleheaders in the summer months of July and August, and twin bills and Monday games will not have extra innings, so as to ease the burden on players.

Teams will be allowed to expand their rosters from 28 to 33 players on Aug. 18, instead of the usual Sept. 1. This will mean, in a full season, they will be carrying larger rosters for 54 games, up from 26.

The league and its teams will be treading on thin ice, though. All it takes is one positive case for a player, a coach or an umpire, and the season could be halted for about three weeks.

Shortening the season will been inevitable at that point, but the KBO will not take immediate action in such a case. Instead, it will meet with team representatives and public health experts to chart its path on resuming the season. 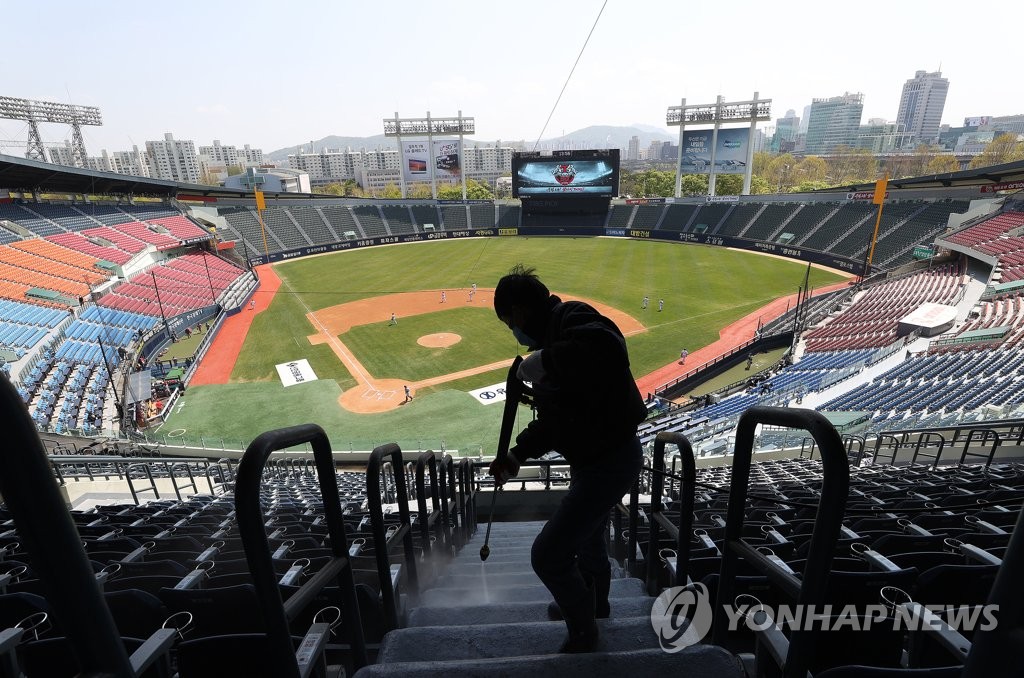 Amid pandemic, S. Korean baseball league bracing for season unlike any other

Amid pandemic, S. Korean baseball league bracing for season unlike any other