SEOUL, April 29 (Yonhap) -- At a theater of CGV, a multiplex chain run by South Korea's entertainment giant CJ Group, in Yeouido, western Seoul, a special and interesting experiment has been carried out: zero-contact cinema.

While the novel coronavirus pandemic has kept even film buffs away from theaters for months to avoid possible infection from human contact, the cinema operator has come up with services removing any interactions. 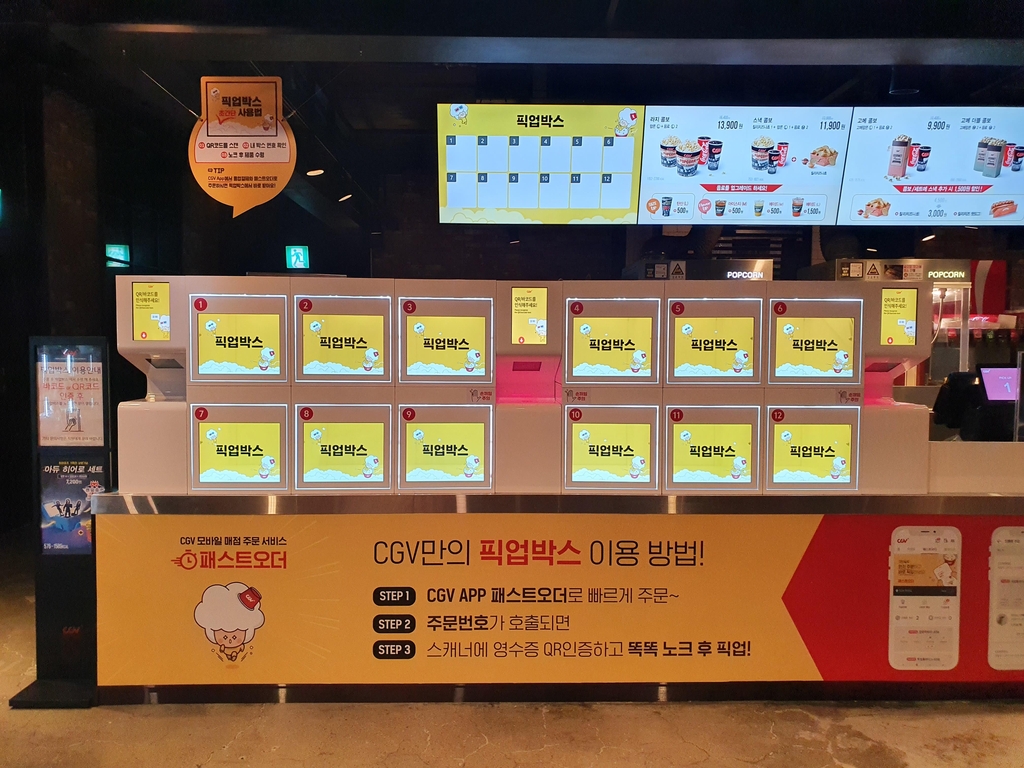 There are no ticket booths or popcorn bar with cashiers, which are usually crowded with lines of moviegoers and light eaters and filled with calls for food orders.

Instead, only ticket machines and automated self-service kiosks for popcorn and soda are open up off to the side, with a hot dog vending machine as well. And 12 pick-up boxes are installed in front of the popcorn bar, with numbers on the doors, as employees prepare snacks after receiving an order from the kiosk and put them in the boxes.

Small scanners wait at the entrances of each theater for customers to scan QR codes, or matrix-typed barcodes, on smartphones, replacing the role of ticket collectors.

People can also go through all these procedures with their smartphones, including ordering a box of popcorn about a kilometer away from the CGV theater like they do for a cup of Starbucks coffee.

Two self-driving robots, called Check-bots, which are about 1.5 meters tall, wander around the corridor to give customers information on the daily timetable or to escort them to restrooms. "I'm surprised that there's no people at the ticket booth or at the counter," said Lee Mi-jeong, who went to the cinema for the first time in a few months. "I tapped a hot dog icon on a digital kiosk out there and picked it up at the pick-up box. This was my first experience, but it was easy."

This unmanned movie theater is part of CGV's digital transformation project, aimed at helping customers spend less time waiting for buying tickets and sodas, while employees can concentrate more on their jobs like preparing food rather than dealing with payment and other tasks.

"We've run the zero-contact cinema at the Yeouido branch as a showcase for about two months," Lee Seung-soo from CGV said. "Due to the spread of COVID-19, people became more reluctant to communicate with people in person, and this project fits into a groove."

The film industry is one of the biggest victims of the coronavirus pandemic in South Korea, which has reported more than 10,700 confirmed cases and nearly 250 deaths since its first case on Jan. 20.

The number of moviegoers in the country dropped to a record low of 1.83 million last month, the lowest monthly tally since local box office data was first compiled in 2004. A year ago, 14.67 million tickets were sold across the nation.

Dozens of homegrown and foreign films have rescheduled their release plans in the spring as people are unwilling to stay in enclosed spaces like movie theaters.

As a result, total revenue nose-dived 88 percent on-year to 15.2 billion won in March, while leading multiplex chains like CGV have closed some of their cinemas for about a month in belt-tightening efforts.

But theaters see a glimmer of hope as the South Korean government will likely lift the strengthened social distancing drive next week, encouraging each sector to prepare to go back to normal.

They have kept their clients spread out in theaters by limiting the number of tickets available for showings, along with the contactless ticket selling and food ordering.

The reduced ticket sales may hurt the bottom line of theaters and film studios, but they knew they had no other choice.

"We've been facing difficulties for months as few people are coming to theaters, and we're pleased that we've finally turned a corner," the CGV official said. "Even though people feel free to come to the cinemas, they will still want less human contact, and we have to be ready for the changed trend."

Experts said that it is time for the film industry to keep up with post-coronavirus life.

"The film community has to look for ways to meet demand for a new environment that is less dense than the current ones," film critic Yoon Sung-eun said. "Through remodeling or other ways, they may offer seats with wider space and more comfortable cushions at the same time, which could attract more customers to theaters."