SEOUL, May 1 (Yonhap) -- Three-fourths of South Korean students received private tutoring in 2019, for which they spent 6.5 hours a week on average, a new survey showed.

The annual survey, released earlier this week and conducted by the national Statistics Korea and the Ministry of Gender Equality and Family on the country's youth population aged 9-24, found that 74.8 percent of the surveyed got private education outside public school. In 2016, the figure was 67.8 percent. The survey included elementary school students (fourth-sixth graders), middle and high school students. 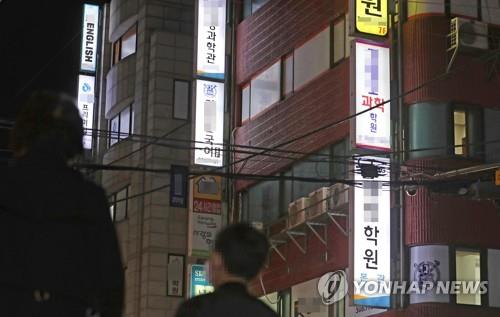 Time spent on private education was found to be 6.5 hours per week, a 0.2-hour increase from the previous year, and mathematics was the most popular topic for which students got such private help at 47.2 percent, followed by English at 44.1 percent and Korean at 21.3 percent.

Korean students' academic performance for reading, mathematics and science knowledge, as gauged by the Programme for International Student Assessment (PISA), is found to be in the upper ranks among the 37 OECD member countries.

More than 75 percent of the surveyed said they were satisfied with their school life: 93.3 percent thought their peers respected and were considerate toward them, and 92.7 percent felt they were respected by their teachers. The level of satisfaction was highest among elementary schoolers at 82.7 percent, 76.3 percent among middle schoolers and 71.1 percent among high schoolers.

About 40 percent of middle and high students said they felt stressed and 28.2 percent said they had felt a sense of depression more than once in the past year.

The surveyed slept, on average, 7.3 hours a night, with the number going down to six hours among high school students, 46 percent of which slept less than six hours.

Meanwhile, the death rate in 2018 rose by 3.8 percent on-year to come to 2,017, reversing the downward trend that had continued since 2010. Suicide turned out to be the biggest cause for death, followed by accidents and cancer. Six out of 10 deaths were boys.