SEOUL, April 29 (Yonhap) -- South Korea's top court on Wednesday confirmed a jail term of 2 1/2 years for a former chief of Aekyung Industrial Co., one of the local producers of deadly humidifier sterilizers in the early 2000s.

The Supreme Court upheld the jail term given by lower courts to Ko Kwang-hyun, former CEO of Aekyung Industrial, for covering up toxicity-related data on the company's disinfectant product Humidifier Mate.

The top court also confirmed a one-year prison term for a former senior executive vice president of Aekyung Industrial, identified only as Yang, for taking part in Ko's cover-up attempt, while another former company official, surnamed Lee, received a suspended sentence of one year in jail on the same charge.

The three were accused of concealing and destroying the company's documents related to the toxicity of Humidifier Mate. 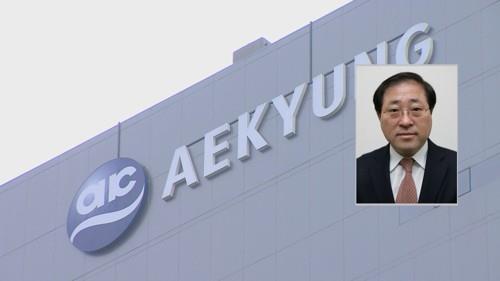 "There are no mistakes in the lower courts' guilty verdicts on the accused's crimes of destruction and concealment of evidence," the top court said.

The three are among 34 former business executives indicted last July by prosecutors after an eight-month reinvestigation into one of the nation's worst scandals involving consumer products. They are accused of manufacturing and selling humidifier disinfectants containing toxic chemicals.

The humidifier disinfectant scandal came into the spotlight after four pregnant women died of lung problems in 2011.

About 6,760 people have so far been registered as victims of the humidifier sterilizer case, of whom about 1,533 have died.