SEOUL, April 29 (Yonhap) -- The Korean Peninsula has been jolted by four earthquakes of magnitude 2.1 or larger in a span of three days this week, the Korea Meteorological Administration (KMA) said Wednesday. 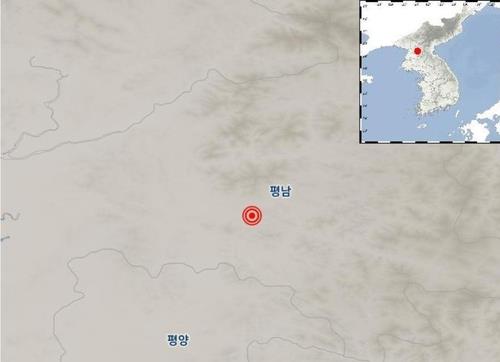 The KMA analyzed the Songchon earthquake as a natural seismic tremor.

Earlier this week, South Korea was rattled by three minor earthquakes in and around the southwestern region.

A 2.4 magnitude earthquake hit Geumsan of South Chungcheong Province, 198 km south of Seoul, shortly after noon Tuesday, while Mokpo, a South Jeolla port city, 410 km south of the capital, logged a 2.1 magnitude quake just before 1 p.m. on the same day.

On Monday, a 2.8 magnitude earthquake hit the North Jeolla county of Jangsu, 318 km south of Seoul. No human injury or property damage has been reported from the three quakes.

Throughout the month of April, eight quakes stronger than magnitude 2 occurred on the peninsula, compared with four in each of January and February and two in March, according to the KMA.

Officials at the KMA said the four quakes occurred around the same time but there is no connection among them.