WASHINGTON, April 29 (Yonhap) -- The United States has had no sightings of North Korean leader Kim Jong-un amid intense speculation he may be seriously ill, but continues to monitor what is happening inside the regime, Secretary of State Mike Pompeo said Wednesday.

The top U.S. diplomat told Fox News in an interview that he didn't have much to add to what President Donald Trump said Tuesday regarding Kim's reported ill health. Trump had said he wishes the North Korean leader well but does not want to comment further. 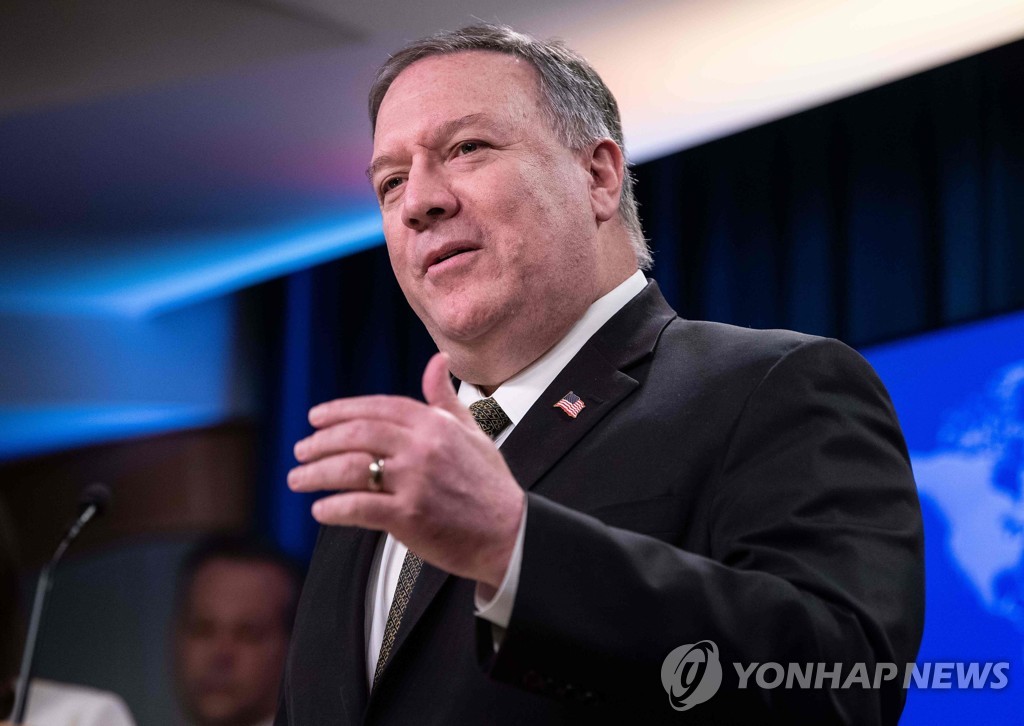 "We haven't seen him," Pompeo said. "We don't have any information to report today. We're watching it closely, keeping track of what's going on not only around Chairman Kim himself, but more broadly inside of North Korea."

Pompeo also noted the risk to North Koreans from COVID-19. The communist regime has insisted it has no confirmed cases of the coronavirus, but many suspect it may be covering up an outbreak.

"There is a real risk that there will be a famine, a food shortage inside of North Korea, too," he said. "We're watching each of those things closely because they have a real impact on our mission set, which (is) to ultimately denuclearize North Korea."

Reuters reported earlier that a North Korean economic delegation was due in Beijing this week to discuss food supplies and trade issues following a severe disruption to food supply caused by the pandemic.

His absence from an April 15 commemoration of the birthday of his late grandfather, North Korea founder Kim Il-sung, sparked speculation that he may be seriously ill.

South Korean officials have insisted that nothing unusual has been detected inside the regime and cautioned against what one official called "fake news" regarding Kim's health.

News reports have described him as being in "grave danger" after surgery or hiding out at a coastal resort to avoid infection by the coronavirus.

Trump said Monday that he knows how Kim is doing but couldn't discuss it yet. He told the media that they may soon find out then added that no one knew where the North Korean leader was.

At a press briefing later Wednesday, Pompeo said the U.S. will continue to push for North Korea's denuclearization regardless of who leads the regime.

"Our mission is the same, regardless of what transpires inside of North Korea with respect to their leadership," he said. "Our mission remains the same: it's to deliver on that agreement that Chairman Kim made with President Trump back in Singapore. And that's the fully denuclearized, verified denuclearization of North Korea."

Pompeo was referring to the first summit between Kim and Trump in Singapore in June 2018, during which the two sides agreed to "work toward" complete denuclearization of the Korean Peninsula.

Despite two more meetings between Kim and Trump, North Korea and the U.S. have failed to make progress toward dismantling the regime's nuclear weapons program.

"We are still hopeful that we'll find a path to negotiate that solution to get the outcome that's good for the American people, good for the North Korean people and the whole world," Pompeo said. "Our mission simply won't change no matter what should transpire."

Asked if Kim's absence would make the mission harder to achieve, he said, "There's a lot of work to do on it. We're going to continue to focus on it."

(LEAD) Pompeo: U.S. has not seen N.K. leader but is closely watching regime

(LEAD) Pompeo: U.S. has not seen N.K. leader but is closely watching regime