WASHINGTON, April 29 (Yonhap) -- Commercial satellite imagery from Wednesday shows a train parked at North Korean leader Kim Jong-un's compound in the coastal city of Wonsan, but it's unclear whether the train has been there since it was first spotted last week, a U.S. monitor said.

38 North, a project of the Stimson Center think tank, had said on Saturday that commercial satellite imagery showed a train probably belonging to Kim parked at a train station servicing the compound on April 21 and 23.

The news came amid conflicting reports about the North Korean leader's whereabouts, with some outlets alleging that he may be gravely ill following surgery. 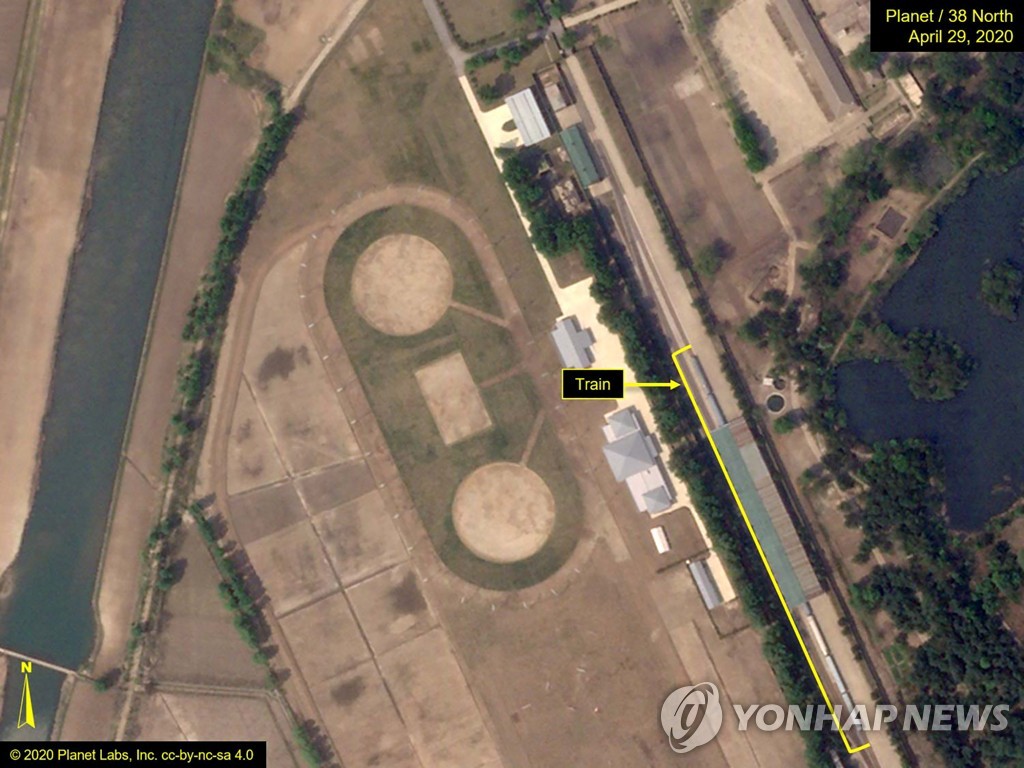 "While a train was first observed at this station on April 21 and again on April 23, it cannot be determined whether it has remained at the station since then," 38 North said on its website.

"On April 29, the train is situated in the same position as before," it said. "However, the engine is no longer parked alongside the south end of the train. Whether the engine car has departed or was simply moved under the station's canopy is unclear. But in either case, the train does not appear to be prepared for departure."

The monitor noted that as in the previous report, the train's presence does not prove the leader's whereabouts or indicate anything about his health.

"While the train's presence is clear, it is not possible to tell from the imagery whether this is, in fact, Kim Jong-un's train or whether he was on it when it arrived," it said. "However, this train station is reserved for the exclusive use of the Kim family, lending weight to the multiple reports that Kim has been staying in the Wonsan area."

On Tuesday, NK News, a U.S. outlet specializing in North Korea affairs, reported that satellite imagery showed the presence of boats often used by Kim moving in patterns that suggest he could be in Wonsan.

According to 38 North, there were at least two other instances in the past 12 months when a train was seen at the same station around the times Kim was reported to be in the coastal city.

The first was in July, when the North Korean leader was reported to have inspected a new submarine at the Sinpo South Shipyard, some 100 kilometers away.

The second was in November around the time Kim reportedly observed a flight contest in Wonsan.

His absence from an April 15 commemoration of the birthday of his late grandfather, North Korea founder Kim Il-sung, sparked speculation about his whereabouts and status.

South Korean officials have insisted that nothing unusual has been detected inside the regime.