SEOUL, May 1 (Yonhap) -- North Korean leader Kim Jong-un remained out of public view for the 20th straight day Thursday amid persisting speculation about his health and who will take over the nuclear-armed communist nation after him.

Kim was last seen in state media on April 11 presiding over a politburo meeting of the ruling Workers' Party. State media have since carried reports about him handling state affairs, such as sending messages to foreign leaders, but no photo or video of him has been released.

Sparking speculation about Kim's health was his absence from a key ceremony commemorating the 108th birth anniversary of his late grandfather and national founder, Kim Il-sung. He has never skipped a visit to the mausoleum on the April 15 anniversary since taking office in late 2011.

The rumor mill was further fanned after CNN reported last week, citing a U.S. official, that Washington is looking into intelligence that Kim is in "grave danger" after a surgery. Other foreign media outlets have carried similar reports.

North Korean state media outlets, such as the main Rodong Sinmun newspaper and the official Korean Central News Agency, have put out routine stories, such as Kim sending diplomatic letters and conveying gifts to honored citizens.

They have also reported on the public activities and on-site inspection trips of top officials, including the country's No. 3 leader Pak Pong-ju and Premier Kim Jae-ryong, in an indication that things are business as usual. 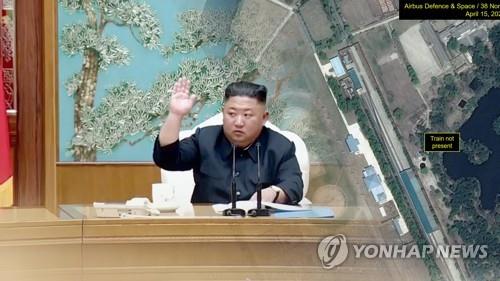 South Korean officials have rejected speculations on problems with Kim's health, saying no unusual signs that something might be wrong with the North's leader have been detected, and he is believed to be staying in the east coast region of Wonsan.

His longest absence from public view was in September 2014, when he disappeared for an unprecedented 40 days and returned limping. Seoul's intelligence agency later said that he had a cyst removed from his ankle.

In Washington, U.S. President Donald Trump said Thursday that he understands the situation with the North's leader, but refused to discuss it and continued to wish him well.

"I understand what's going on, and I just can't talk about Kim Jong-un right now," Trump said at a White House event on protecting seniors. "I just hope everything is going to be fine. But I do understand the situation very well."

The U.S. Congressional Research Service said in a report this week that Kim's younger sister, Kim Yo-jong, is among the most likely to succeed him should he die or become incapacitated.

"The 36-year-old Kim, obese and a heavy smoker, is believed to have suffered from various health problems over the years," said the report on U.S.-North Korea relations, which was updated Wednesday.

"Kim is believed to have three children under 10 but has no obvious heir. If he dies or becomes incapacitated, it is uncertain who would succeed him. His younger sister and confidante, Kim Yo Jong, is among the most likely," it said.

Kim is believed to have health problems apparently linked to obesity and heavy smoking. His prolonged absence from public view has often spawned rumors about deterioration in his health.

North Korea's media outlets rarely dispute any rumors about its leader directly, and they usually release reports or photos to suggest he remains in good health.

N.K. leader out of public eye for 20th straight day

N.K. leader out of public eye for 20th straight day