SEOUL, May 2 (Yonhap) -- The number of criminal acts committed by service members against their seniors tripled over the past five years, government data showed Saturday.

The military police carried out investigations into a total of 217 cases where service personnel abused higher-ranked members last year, up from 63 cases tallied in 2015, according to the data from the defense ministry.

The surge in such incidents came despite the decline in the number of overall disciplined cases among service members. In 2019, the number of accidents and incidents at the barracks that led to disciplinary actions and criminal punishment stood at 42,038, down around 32 percent from 62,359 in 2015, the data showed.

Recently, the military has come under fire for a series of lax discipline cases. An Army corporal is under investigation over allegations that he hit a female captain with a folding shovel last month over "tough operations."

The authorities also launched a probe into four Army noncommissioned officers last month for alleged sexual harassment of one of their male superior officers.

As part of efforts to root out such cases, the ministry is planning to set up a task force this month in charge of devising measures, according to its officials.

"I feel sorry for causing concerns. We take those issues seriously," Minister Jeong Kyeong-doo said during a parliamentary meeting Wednesday, vowing to sternly deal with the cases and to strive for preventive measures. 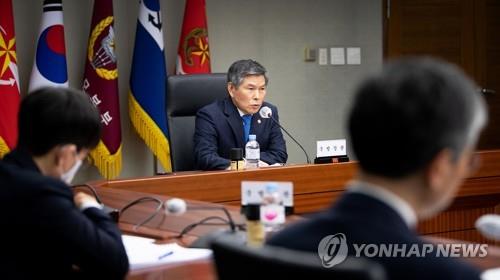 No. of crimes by service personnel against seniors tripled over 5 yrs: data

No. of crimes by service personnel against seniors tripled over 5 yrs: data