"I'd rather not comment on it yet -- Kim Jong-un," Trump told reporters at the White House before departing for Camp David. "We'll have something to say about it at the appropriate time."

Asked if Kim is still alive, he said, "I don't want to talk about it. 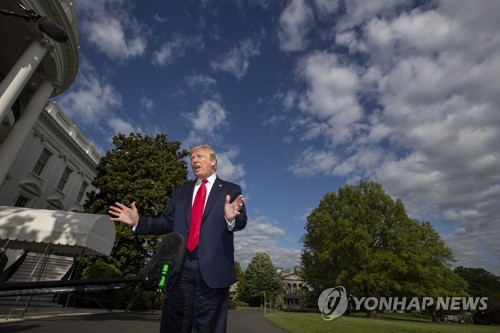 Moments earlier, North Korea's state media announced the first public appearance of Kim since April 11 at a ceremony marking the completion of a fertilizer plant in Sunchon, north of Pyongyang.

During his absence from public view, news reports described Kim as being in "grave danger" after surgery or hiding out at a coastal resort to escape the coronavirus pandemic.

Trump said initially that he didn't know if the reports were true then later said he had a "very good idea" about Kim's status but couldn't talk about it.

Speculation about Kim's whereabouts and health began after he apparently skipped the April 15 commemoration of the birthday of his late grandfather, North Korea founder Kim Il-sung, which is an important holiday in the communist regime.

Trump and Kim have met three times in a bid to reach a deal on dismantling North Korea's nuclear weapons program in exchange for U.S. concessions.

Since their second summit in Vietnam in February 2019 ended without an agreement, negotiations between the two sides have stalled due to differences over how to match their steps.

Trump has still claimed to have a close personal relationship with Kim and insisted that had he not been elected president the U.S. would be at war with North Korea.

Before entering into summit diplomacy with the U.S. in 2018, North Korea tested nuclear weapons and long-range ballistic missiles that posed a threat to the American mainland.