(ATTN: UPDATES with recovery of what are believed to be remains; CHANGES headline)

ICHEON, South Korea, May 3 (Yonhap) -- Police said Sunday they have recovered what are believed to be remains of a victim of a fire that killed scores of workers in Icheon, south of Seoul.

The fire that tore through a warehouse in Icheon on Wednesday killed 38 and injured 10 others. Among those killed were one Chinese and two Kazakh workers.

Icheon, located about 80 kilometers south of Seoul, is home to SK hynix Inc., the world's second-largest maker of DRAM chips, as well as a large number of warehouses and storage facilities for retailers. 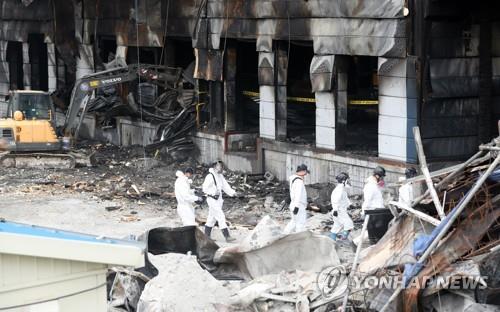 On Sunday, investigators at the Gyeonggi Nambu Provincial Police Agency found what are believed to be a body part, two mobile phones and a car key on the basement floor.

Police said they will send the remains to the National Forensic Service for DNA tests for identification.
(END)