SEJONG, May 4 (Yonhap) -- South Korea's inflation slowed to its lowest level in six months in April as consumers refrained from spending over the coronavirus pandemic, data showed Monday.

Consumer prices rose 0.1 percent on-year in April, which was below market expectations. A recent survey by Yonhap Infomax, the financial news arm of Yonhap News Agency, expected consumer prices to have gained 0.34 percent in April.

The April tally compares with a 1 percent on-year gain in March, according to the data released by Statistics Korea. 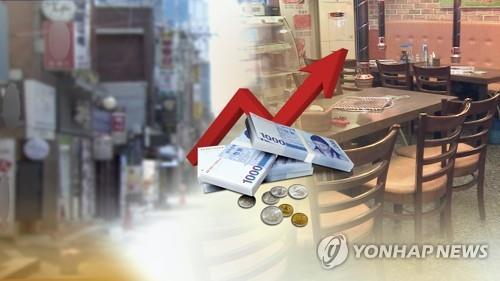 In April, prices of livestock products rose 3.5 percent from a year earlier, and the prices of processed foodstuff rose 1.3 percent.

"Inflation will unlikely turn negative because of a low base effect from last year when prices were low, but it may drop down the road due to a decline in global oil prices," an official from the statistics office said.

In March, the BOK delivered its first emergency rate cut in over a decade, slashing the policy rate by half a percentage point to send it below the 1 percent mark for the first time in its history.

Economists warned that Korea's economy, pounded by the coronavirus crisis, may fall into a bout of dropping prices, or deflation. Deflation generally refers to a steady drop in prices of a wide range of products and services.

Joo Won, a researcher at Hyundai Research Institute, said, "It's a fact that consumer prices are unusually low."

Joo said the nation's economy is close to falling into a deflation phase, as the coronavirus shocks are expected to further dent exports and consumption.

Sung Tae-yoon, an economics professor at Yonsei University in Seoul, echoed the view, saying the GDP deflator has already contracted and producer prices have fallen below 1 percent.

"I think that deflation is under way due to an economic slowdown," Sung said.