SEOUL, May 4 (Yonhap) -- The military will begin allowing enlisted service members to go on vacation this week after months of restrictions, amid signs of a slowdown in the spread of the new coronavirus, the defense ministry said Monday.

All enlisted service personnel have been banned from off-base trips in principle since Feb. 22 when the country began to report a drastic surge in COVID-19 infections.

But the restrictions on vacationing will be lifted on Friday in line with the government's decision to end the weekslong, strict social distancing campaign and turn to an "everyday life quarantine scheme" this week.

"We began allowing service members' off-base travel on April 24. Since then, no additional patients among military populations have been reported. The country's virus situation has also been stabilized and there have been few community infection cases recently," the ministry said in a release, explaining the reasons for the resumption decision.

Other restrictive measures, including banning soldiers' staying out and meeting outside visitors at the barracks, will be eased in phases in consideration of the virus circumstances down the road, it added.

The resumption of vacationing will come along with various anti-virus measures, including tougher education for quarantine and hygiene guidelines and making more military hospitals capable of testing the virus, according to the ministry.

"The decision is expected to ease our service members' stress and allow the stable management of troops," the ministry said, expressing gratitude for the troops' full cooperation.

As of Monday, the military reported 39 virus infections in barracks, with the latest case being reported in mid-March. Of the total, 38 patients fully recovered, the ministry said, adding that around 960 are quarantined as a preventive step.

Nationwide, South Korea had eight more cases of the new coronavirus on Monday, all of which came from overseas. The total infections came to 10,801, according to the Korea Centers for Disease Control and Prevention (KCDC). 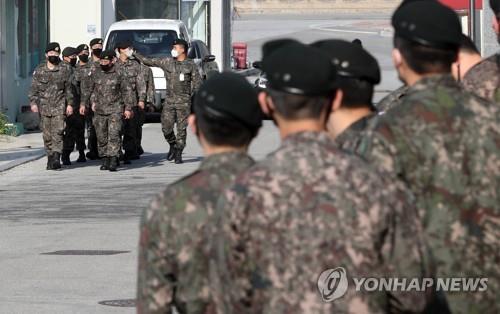