SEOUL, May 4 (Yonhap) -- Hyundai Motor Co. and its affiliate Kia Motors Corp. said Monday their combined sales in the United States fell 39 percent in April from a year earlier due to the coronavirus outbreak affecting the auto industry.

Hyundai and Kia sold a total of 66,479 vehicles in the world's most important automobile market last month, down from 108,410 units a year ago, according to the companies' data. 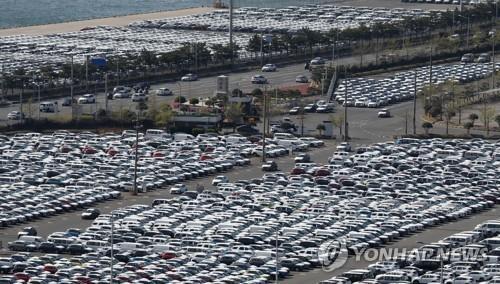 Hyundai and Kia have suspended most of their overseas plants to help prevent the spread of COVID-19 and keep inventories at manageable levels.

They stopped operations at all of their domestic plants on April 30, with the suspension scheduled to last until Tuesday.

Their domestic sales figures are set to be released Wednesday.

The carmakers said they will focus on boosting domestic sales for the time being with new models, such as the Genesis GV80 SUV, the Genesis G80 sedan, the Kia Sorento SUV and the Hyundai Avante compact.