SEOUL, May 4 (Yonhap) -- North Korea has not responded yet to South Korea's call for an explanation on Sunday's firing of several bullets that hit a South Korean guard post on the inter-Korean border, Seoul's defense ministry said Monday.

On early Sunday, four bullets from the North hit the South's guard post in the central part of the Demilitarized Zone (DMZ) in Cheorwon, Gangwon Province, prompting South Korean troops to respond by firing 20 rounds of warning shots and issuing broadcast warnings, according to the Joint Chiefs of Staff.

Following the incident, the South's military sent a notice via the military communication line, lodging a protest, calling for an explanation and urging the regime to stop acts that violate the inter-Korean military accord, the defense ministry said.

"We've not received any response from the North Korean side," ministry spokesperson Choi Hyun-soo told a regular briefing.

Asked if the ministry is considering taking additional steps regarding the North, the official said it will make a decision if necessary after closely following the developments.

The U.S.-led United Nations Command, which administers the DMZ and enforces the armistice agreement that ended the 1950-53 Korean War, said it will launch an investigation into the case.

"UNC is cooperating closely with ROK Joint Chiefs of Staff to assess and continue to monitor the situation. UNC will conduct a thorough investigation tomorrow (Monday, May 4) to determine if there was an Armistice Agreement violation, and will provide the report to the appropriate authorities once completed," the command said in a statement sent to Yonhap News Agency.

Any additional acts or specific movements by the North Korean military have not been detected so far, according to JCS spokesman Col. Kim Jun-rak.

"We had taken appropriate measures immediately after our troops heard gunshots, and found the bullet marks. Any further details will be available after investigations by the UNC and our authorities," Kim said during the ministry briefing. "We have been closely monitoring the situation." 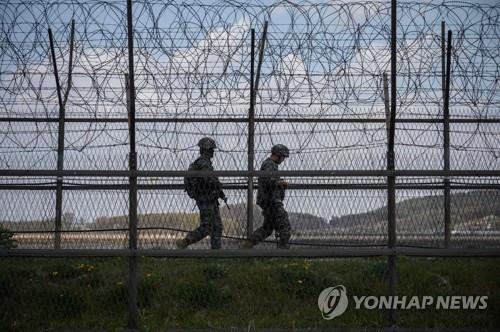 On Sunday, U.S. Secretary of State Mike Pompeo said in an interview with ABC News, "We think those are accidental," stressing that there was no loss of life on either side.

A JCS officer also said it did not appear to be an intentional provocation.

"It was far from 'perfect' circumstances for making provocative acts," he said, noting that it was foggy at that time; the South Korean guard post is located at a higher altitude than North Korean guard posts situated in the region; it was the time when North Korean soldiers usually rotate shifts and check their firearms or equipment; and no unusual movements by the North Korean military had been detected.

The incident took place a day after North Korean leader Kim Jong-un made his first public appearance in nearly three weeks, ending rumors about his health.

Some have raised speculations that the shooting could have something to do with Kim's appearance, but JCS officials said they believe the chances are low.