SEOUL, May 4 (Yonhap) -- President Moon Jae-in expressed hope Monday that the government's unprecedented "emergency disaster relief payments" for all households in South Korea will serve as a catalyst to reinvigorate the economy dampened by the coronavirus pandemic.

"The government will do its best to have the emergency disaster relief payments, which would be granted for the first time in (South Korea's) history, delivered rapidly and conveniently," he said at the start of a weekly meeting with his senior Cheong Wa Dae aides. "I expect it to be of help to economic revitalization, even a little." 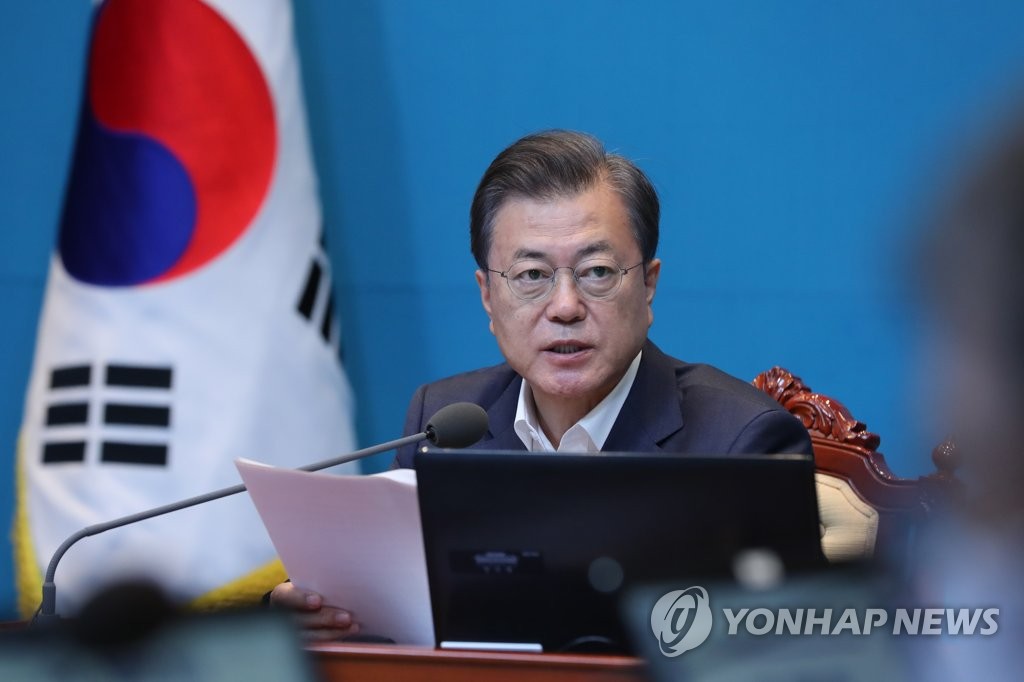 The Moon administration has begun doling out up to 1 million won (US$814) each for a total of around 2.8 million low-income families and those living on the disability pension, already listed for a welfare policy, via online accounts. A one-member household is eligible for 400,000 won, and those with two and three members 600,000 won and 800,000 won, respectively. A family with four or more can receive 1 million won.

The remaining 18.9 families will get the money starting next week in credit, debit, prepaid or gift cards.

The government initially decided to exclude the top 30 percent by income for the one-time direct financial support in consideration of budget constraints. It later expanded the scope of beneficiaries, braving the issuance of deficit-financing bonds.

Instead, the government is campaigning to encourage the wealthy to donate their share.

"Donation is a voluntary choice of good faith. There can't and shouldn't be coercion," Moon pointed out, adding donated funds would be used to help maintain employment and support those who have lost their jobs.

Regarding last week's warehouse blaze in Icheon, Gyeonggi Province, which killed 38 workers, Moon instructed relevant authorities to map out thorough measures to prevent the recurrence of a similar incident.

"It was a very regressing and shameful incident" in that there were such mishaps here in the past, the president said, calling for steps to "fundamentally remove risk factors."

Moon hopes for economic effects from cash handouts for families

Moon hopes for economic effects from cash handouts for families