SEOUL, May 5 (Yonhap) -- North Korea's main newspaper on Tuesday touted the recent completion of a fertilizer factory as the first key outcome of its "frontal breakthrough" drive aimed at developing its economy crippled by international sanctions.

The Sunchon Phosphatic Fertilizer Factory in Sunchon, north of Pyongyang, has drawn global attention as North Korean leader Kim Jong-un visited a ceremony marking its completion Friday after a 20-day absence that fueled rumors of his failing health.

"The whole area of Sunchon is a political frontline where the legitimacy of the frontal breakthrough ideology is proven as a reality, and a precious outcome that adds vitality to the chemical industry, part of the twin pillars of the economic development," the Rodong Sinmun said in a piece.

The newspaper stressed workers' dedication to the construction, saying their hard work came despite "harsh sanctions pressure from hostile forces."

It also highlighted the factory's automated processes from putting raw materials into production lines to packaging products, and systems to ensure workers' safety and protect the surrounding environment.

Kim's visit to the factory event marked his first public appearance since he presided over a key ruling party session on April 11. His absence from an annual event marking the April 15 birth anniversary of his late grandfather and national founder, Kim Il-sung, sparked speculation he might be seriously ill.

The North Korean leader has been ramping up the "frontal breakthrough" campaign as prospects of sanctions relief had dimmed amid the deadlock in nuclear negotiations between Washington and Pyongyang. 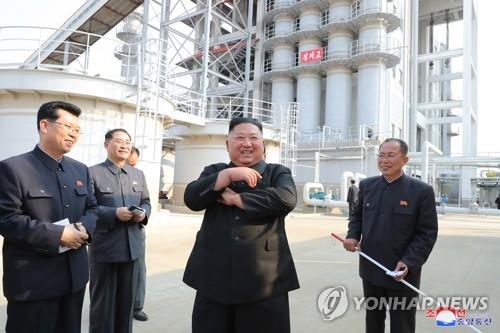