SEOUL, May 5 (Yonhap) -- The operator of the ride-hailing service Tada has filed a constitutional appeal against a revised passenger transport service act, company officials said Tuesday, accusing the amendment of infringing on the freedom of corporate activities and other basic rights.

The Value Creators & Company (VCNC) submitted the petition to the Constitutional Court on Friday, about two months after the National Assembly passed the revision that effectively bans the ride-hailing service.

The act allows the company to rent out its vans with drivers for at least six hours at airports and ports, and only for tour purposes. Previously, chauffeur-driven Tada vans were able to serve customers without limits on service hours and rental areas.

"(VCNC) filed the petition on May 1, as the revised act virtually bans Tada and thus infringes on the constitutionally protected right to pursue happiness, the right to equality, and freedom of corporate activities," the company said in a statement.

The VCNC pointed out that the act encroaches upon people's rights to make their own decisions by restricting options related to transportation.

Following the passage of the revision in March, the VCNC suspended its key ride-haling service. The passage followed an intense tug of war over the country's growing mobility market between technology-driven mobility companies and taxi drivers.

Launched in October 2018, Tada had won 1.7 million registered users in an indication of public support for the new mobility option in a country where it is not easy to grab a taxi in busy commercial areas, especially at night. 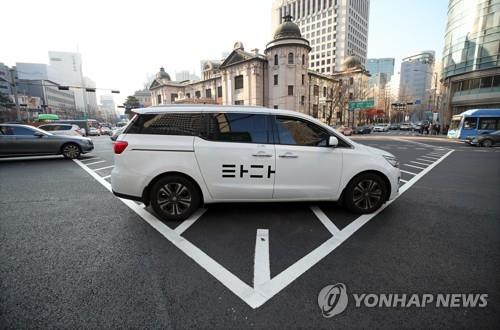