SEOUL, May 6 (Yonhap) -- North Korea's exports plunged in 2019 from four years earlier due to tougher international economic sanctions with its trade dependence on China hitting a record high, a report said Wednesday.

The reclusive country's overseas shipments came to US$261 million last year, down 20.9 percent from a year earlier, according to the report from the Korea International Trade Association (KITA).

The figure also amounted to just one-seventeenth of the country's exports of US$4.56 billion recorded in 2015.

"North Korean exports have been markedly larger than its overseas shipments since the international community ramped up economic sanctions on the country," KITA said. 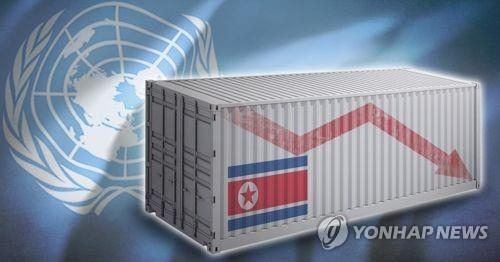 The United Nations and the United States toughened its penalties on North Korea for its nuclear weapons and missile development program.

The report showed North Korea's trade partners numbering 62 last year, down sharply from 115 the previous year, with China remaining its No. 1 trade partner.

North Korea's trade dependence on its biggest economic ally reached an all-time high of 95.2 percent in 2019, which was also up from 91.7 percent a year earlier.

Trade between the two countries stood at $2.84 billion last year, up 15.3 percent from the prior year.

Watches were North Korea's leading export item in 2019, accounting for 18.8 percent of the total. Ferrosilicon, an alloy of iron and silicon, came next with 11.3 percent and wigs with 11.2 percent.

KITA predicted North Korea's trade will shrink considerably this year due to the coronavirus pandemic, adding its trade dependence on Beijing will likely hit a new high.
(END)