SEOUL, May 6 (Yonhap) -- An 18-year-old co-conspirator of a high-profile digital sexual exploitation ring was indicted on Wednesday for allegedly producing and distributing sexual abuse materials featuring women and girls.

The Seoul Central District Prosecutors Office said it referred Kang Hun for trial after indicting him on charges of acting as an accessory to the operation of the "Baksabang" chatroom on the messaging service Telegram, which allowed paid members to view illegally taken photos and videos of violent sex acts.

Kang is accused of having recruited and managed paid members of Baksabang (Korean for doctor's room), producing and distributing sexual abuse materials and delivering criminal proceeds worth about 26.4 million won (US$21,600) from the chatroom to its founder, Cho Ju-bin.

Specifically, Kang is suspected of blackmailing 18 female victims, including seven minors, into producing sexual materials between September and November last year for distribution and sales via Baksabang. He allegedly swindled 10 million won out of one of his victims by pretending to be a court judge. 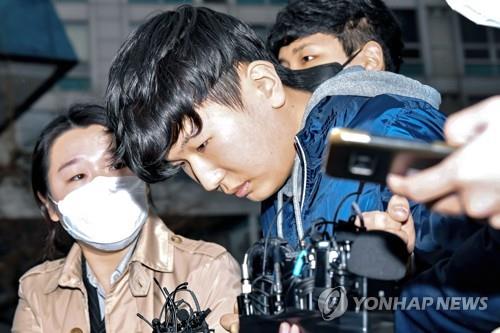 Cho, a 24-year-old, has been indicted for allegedly blackmailing women into providing sexual videos to the illegal Telegram chatroom. At least 25 people, including eight underage girls, have been confirmed to be exploited by Cho.

Kang drew extensive media attention in the middle of last month, when the police disclosed his full name, age and face while transferring him to the custody of prosecutors for further investigation and indictment.

Kang was forced to stand in front of the public on April 17, marking the first time in South Korea that the police have made public the identity of a minor criminal suspect. The current law permits the disclosure of the identity of sex offenders but grants exceptions for minors. Kang, born in 2001, was a high school student last year when he allegedly worked for Cho.

The nation has been shocked by a string of sexual exploitation cases centered on group chatrooms of the Telegram messenger service, including Baksabang, prompting the government to announce new tough measures on digital sex crimes on April 23.

The authorities vowed to push to punish even buyers, advertisers and possessors of child and youth sexual abuse materials, as well as their producers and sellers, and to treat any production of digital sexual materials as a felony crime. 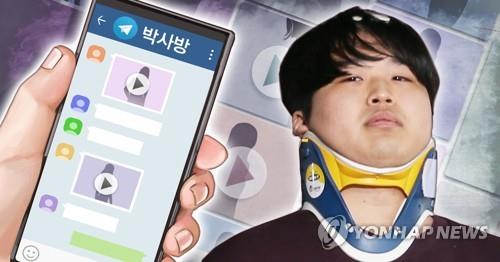 The two suspects, identified only as men aged 24 and 29, are accused of delivering money from Cho's fraud victims, including Sohn Suk-hee, president of cable channel JTBC, and former Gwangju Mayor Yoon Jang-hyun, to the Baksabang founder.

The two men are also suspected of converting cryptocurrencies paid by Baksabang members into cash and delivering the money to Cho.

The duo are additionally charged with helping Cho in his online scams, in which they defrauded about 30 people attempting to buy drugs after falsely touting drug sales on Telegram.