SEOUL, May 6 (Yonhap) -- South Korea has already made its best possible offer in defense cost-sharing talks with the United States, a diplomatic source said Wednesday, after a senior U.S. official urged Seoul to show flexibility.

On Tuesday, Marc Knapper, deputy assistant secretary of state for Korea and Japan, renewed Washington's call for flexibility, stressing that the U.S. has been "very flexible up until now."

"I cannot mention the number, but the foreign minister has already said that the offer was the best possible one," the source told Yonhap News Agency on condition of anonymity.

Kang made the remarks in response to a lawmaker's question regarding the media reports that U.S. President Donald Trump had rejected Seoul's offer of at least a 13 percent increase.

After the reports, Trump confirmed the rejection without mentioning any number, saying Seoul should pay "for a big percentage of what we're doing" there.

Despite Washington's claims of its flexibility in the SMA talks, the source said there has been little progress in SMA talks since early April.

"There has been no big change since early April," the source said. "We have no idea whatsoever as to what kind of flexibility that the U.S. is talking about."

Since the last unfruitful talks over the sharing of the cost for stationing the 28,500-strong U.S. Forces Korea (USFK) in Los Angeles in March, Seoul's top negotiator Jeong Eun-bo and his U.S. counterpart, James DeHart, have continued communication by email and phone.

Trump's rejection deepened worries that tensions over the defense cost could erode the alliance at a time when Seoul and Washington need to focus on advancing the stalled negotiations to denuclearize North Korea and foster lasting peace on the Korean Peninsula.

The protracted tug of war also heightened concerns that it could weaken the allies' combined defense posture when Pyongyang appears intent on bolstering its missile and rocket capabilities through repeated firing tests.

Some observers raised cautious optimism that a turnaround in SMA negotiations could come, given that President Moon Jae-in seeks U.S. support for his inter-Korean cooperation projects, while Trump wants Seoul's cooperation in securing quarantine supplies to battle the COVID-19 pandemic.

Others, however, said that whether Trump would agree to a compromise remains uncertain, as he appears intent to project himself as a good deal-maker, especially ahead of the November elections for a second term. 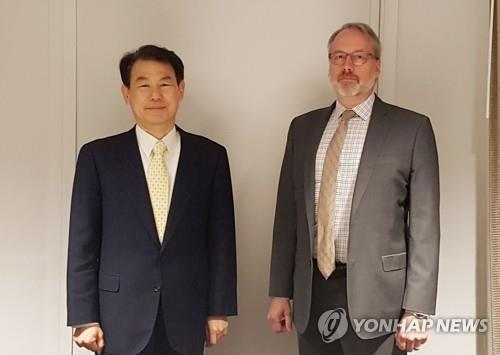