SEOUL, May 6 (Yonhap) -- The government announced Wednesday that it will slap a 77.6 billion-won (US$63.40 million) fine on Mercedes-Benz Korea for fabricating emissions data of its diesel cars, marking the company's first and the industry's largest financial penalty for falsifying diesel emissions in South Korea.

The South Korean unit of the German carmaker was found to have submitted falsified emissions reports for 12 diesel models -- including the C200d, GLC220 d 4Matic, GLD250 d 4Matic and ML250 BlueTEC 4Matic -- sold between 2012 and 2018, the Ministry of Environment announced.

Mercedes Benz sold a total of 37,154 units of the models in South Korea.

According to the ministry, the penalty marked Mercedes-Benz Korea's first-ever and the industry's largest fine for mishandling emissions figures in the South Korean market.

Nissan and Porsche sold 2,293 and 934 units of the problematic diesel models, respectively, during the same period.

The three automakers were found to have operated illegal software in their diesel models to manipulate levels of exhaust gas recirculation (EGR) and selective catalytic reduction when driving, according to the ministry. This software was not presented to regulators during tests for certifications.

EGR is one of the principal devices used to reduce nitrogen oxide emissions from diesel engines. Nitrogen oxides are toxic air pollutants that are released when fuels are burned in factories and automobile. It produces fine dust and ozone through photochemical reactions.

According to the ministry, the nitrogen oxide output levels of some Mercedes Benz models reached over 13 fold at most compared to the safety standard of 0.08 g per kilometer.

The ministry added that it plans to press criminal charges and order recalls for the three carmakers, as well as revoke certifications of the problematic models.

"We plan to review and strictly manage illegal emission submissions to reduce fine dusts from diesel cars," the ministry said.
Mercedes-Benz Korea, meanwhile, rebutted the environment ministry's announcement, claiming that the software in question is part of a comprehensive proprietary emissions control system.

"This feature should be understood as part of a complex emissions system, which allows aggressive purification of emissions gas under varying driving conditions throughout a car's life span," the company said in a statement.

The company also said the ministry's findings applied to units that were discontinued as of May 2018, which were then produced under Euro 6 emission guidelines. New models currently sold on the market, according to the company, are not affected.

"We plan to pursue legal action against the environment ministry's decision in the near future," the company stated. 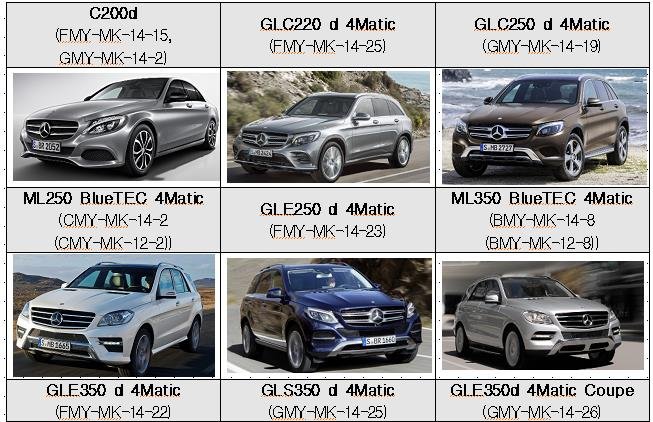