SEOUL, May 7 (Yonhap) -- Asiana Airlines Inc. said Thursday it will raise its share and convertible bond sale ceiling limit to preemptively prepare for the impact of the prolonged coronavirus outbreak on the airline industry.

Asiana plans to get approval from its shareholder meeting next month to raise capital in case of a liquidity crisis caused by the COVID-19 virus, a company spokesman said over the phone.

In a shareholders meeting held in March, Asiana raised the share sale limit from the then existing 600 million shares to 800 million stocks in order to help HDC Hyundai Development Co.'s bid to acquire the country's second-biggest airline.

Asiana has 223 million outstanding shares valued at 866 billion won as of Thursday. 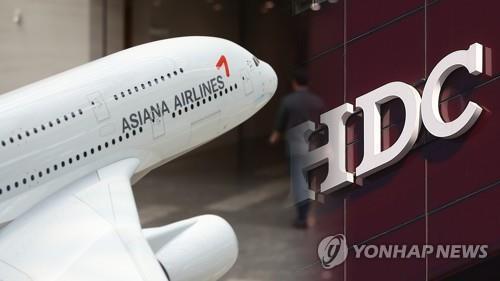 In December, the consortium set up by HDC and Mirae Asset Daewoo signed a deal to acquire a 30.77 percent stake in the airline from Kumho Asiana Group, as well as new shares to be issued and Asiana's six affiliates, for 2.5 trillion won (US$2.2 billion).

The HDC-led consortium was planning to complete the acquisition by the end of April but said last week its acquisition of Asiana will be finalized after May, as a foreign regulator has yet to approve their integration.

To complete the overall process to acquire Asiana, it is essential to obtain approval from all countries to which the airline offers services over the integration of the two Korean companies.

Regulators in the United States, China, Kazakhstan, Uzbekistan, Turkey and South Korea have recently approved HDC's planned takeover of Asiana. Russia is the only remaining country that is still reviewing the integration.

Once Russia approves the deal, HDC said it will be able to enter into the process to take over Asiana.

Asiana and other South Korean carriers have suspended most of their flights on international routes, as an increasing number of countries have strengthened entry restrictions on incoming passengers amid virus fears.

To help Asiana stay afloat, the country's two state lenders -- the Korea Development Bank (KDB) and the Export-Import Bank of Korea (Eximbank) plan to inject a combined 1.7 trillion won into Asiana amid the growing impact of COVID-19 on the airline sector.

The two policy lenders, which are also creditor banks of Asiana, have decided to extend new loans to Asiana to dispel growing concerns that creditor banks' plan to sell the airline may fall through due to the virus impact, a KDB official said.

Last year, the KDB and Eximbank extended a total of 1.6 trillion won to the country's second-biggest airline.

The HDC consortium plans to invest a combined 2.18 trillion won in new shares to be issued by Asiana to help improve the airline's financial status. It said it plans to cut costs by streamlining routes and enhancing cost effectiveness.

HDC expects the capital injection to help lower the airline's debt-to-equity ratio to 300 percent from the current 660 percent.

Shares in Asiana plunged 28 percent this year through Wednesday, underperforming the broader KOSPI's 12 percent loss. Asiana fell 2.8 percent to 3,880 won, and the KOSPI rose 1.8 percent to 1,928.76 on Wednesday.

In its latest self-help plans, Asiana said it had all of its 10,500 employees take unpaid leave for 15 days a month from April until business circumstances normalize. Asiana's executives have also agreed to forgo 60 percent of their wages, though no specific time frame was given for how long the pay cuts will remain in effect.