SEOUL, May 7 (Yonhap) -- South Korean travel agencies plunged into the red in the first quarter of the year due to the coronavirus pandemic, with no end to their malaise in sight, industry sources said Thursday.

Those tour operators have borne the brunt of the global spread of COVID-19, which has resulted in a tumble in travel demand following lockdowns in the United States and major European countries.

Two South Korean outbound travel operators -- no. 1 HanaTour and runner-up Mode Tour -- were widely estimated to have lost money in the January-March period, but their results were shocking, according to the sources.

Both companies saw their first-quarter revenue halve from a year ago and swung to a net loss, spawning concerns over their performances down the road.

In a regulatory filing Wednesday, HanaTour said it swung to a net loss of 34.9 billion won (US$28.4 million) during the three-month period.

Sales tumbled 51 percent on-year to 110.8 billion won, and the company recorded an operating loss of 27.5 billion won on a consolidated basis.

It marks the first time since HanaTour's establishment that the leading travel agency has posted an operating loss of 20 billion won or more. 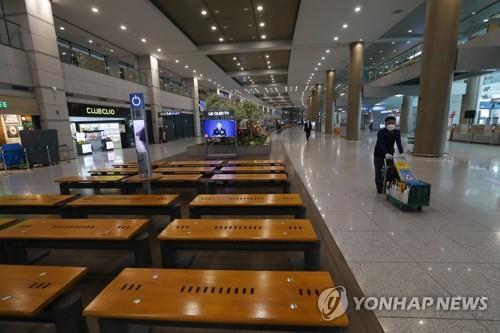 Mode Tour registered a net loss of 1.4 billion won in the first quarter on sales of 44.2 billion won, which was down a whopping 52 percent from the same period a year earlier.

The tour company posted a consolidated operating loss of 1.4 billion won, compared with an operating profit of 9.1 billion won a year earlier.

The coronavirus outbreak has dealt a harsh blow to local tour agencies as more than 140 countries have imposed entry bans on South Koreans.

The number of outbound travelers tumbled nearly 94 percent on-year in March, when the world was in the throes of the novel coronavirus outbreak.

Sales of overseas tour products by HanaTour and Mode Tour came to almost zilch in March and April. Overseas travel programs account for more than 90 percent of their products.

Despite the improved coronavirus situation in South Korea, local tour agencies are feared to face difficulties as long as the outbreak persists abroad.

According to the World Tourism Organization, overseas travel restrictions or bans are in place in nearly 96 percent of destinations across the globe.

"There are no expectations for improvements in travel agencies' performances in the second quarter amid the absence of sales," an industry source said on condition of anonymity.

To date, the new coronavirus has infected some 3.74 million people and claimed more than 260,000 lives globally. South Korea reported no new local cases for the third straight day Wednesday. The nation's caseload totaled 10,806 with its death toll reaching 255.
(END)