SEOUL, May 7 (Yonhap) -- As South Korea officially began an "everyday life quarantine" this week, the religious community, which has put nearly all public meetings and services on hold for two months, is resuming their Sunday worships and Masses, and also making a stab at new ritual procedures.

The country has carried out intensive social distancing for nearly two months that demanded people stay at home and led to closures and cancellations of schools and nearly all kinds of public gatherings.

But it switched to a relaxed, everyday form of social distancing Wednesday as its number of daily new COVID-19 infections has remained in the single digits for days, compared with a daily high of 909 tallied on Feb. 29.

The South Korean government has still asked people to follow sanitation recommendations on every occasion but lifted bars on outdoor activities and public events, including professional sports games and religious services.

NS Grace Church, a Presbyterian church in the Gangnam district in southern Seoul, opened an online page Wednesday for people to book slots for its upcoming Sunday service, the first on-site worship in 10 weeks.

Only 250 followers of the 7,000-member church are allowed to attend each of the three rounds of chapel services at two-hour intervals in the 2,000-seat main hall.

Those who reserve a seat should present their church membership code, which the church office sends through a text message, when entering the hall Sunday. They also are required to have their temperature checked and report their addresses and contacts at the entrance.

"We will start holding on-site and online services simultaneously May 10," the church said in an announcement. "We will comply with the eight quarantine guidelines requested by the Gangnam Ward office."

The church said it will keep its baby-sitting service and a cafeteria closed as coronavirus precautionary measures, with other weekday gatherings and events still suspended.

It is not the only religious institution to resume their official rituals limiting participants in on-site chapels and strengthening identification process at the same time.

Yoido Full Gospel Church in Seoul, the biggest Protestant church in South Korea with 560,000 congregants, held its on-site service last Sunday, but allowed 1,200 believers, just a tenth the full capacity of the church, to take part in the first chapel in two months.

Those people who applied in advance to attend were asked to prove they are members of the church before entering for the service, wear masks and keep a certain distance from others. 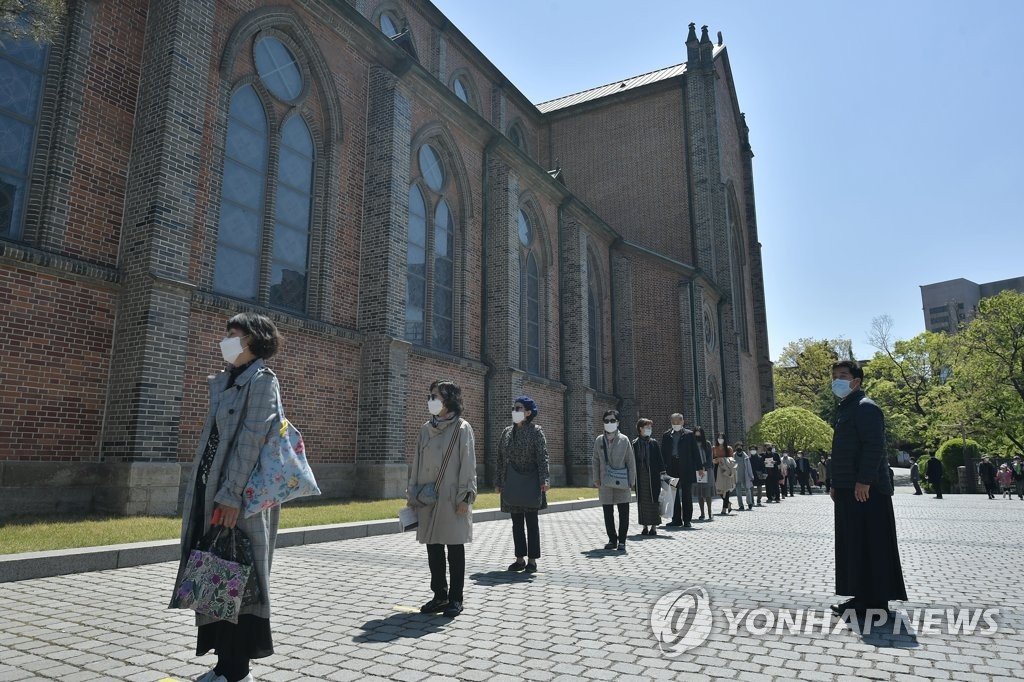 Myeongdong Cathedral in central Seoul has not let its guard down yet and also undergone similar reservation, distance seating and ID verification processes at its Masses since April 23 when the Catholic Archdiocese of Seoul decided to resume rituals at 232 chapels across the capital city.

Out of 16 Catholic dioceses in the country, 12 cities, including Seoul and Incheon, have restarted on-site services, while the remaining four will hold their services again by Saturday.

The Buddhist community restarted its community services as well with a prayer meeting on April 30, Buddha's Birthday, at temples across the country. Participants are required to have their temperature checked and report their contact numbers at the entrance.

According to a survey by the Christianity Media Forum of Korea (KCMF), 94 percent of 412 surveyed churches with more than 1,000 members have gone back to normal.

But only 20 percent of the seats in their chapels have been filled due to churches requiring distances of one or two meters between occupants.

"We expect 97 percent of Protestant churches will hold offline services this coming Sunday," a KCMF official said. "But their services will not likely be like they were before the coronavirus outbreak."