SEOUL, May 7 (Yonhap) -- The African swine fever (ASF) virus, which has hit South Korea's pig farmers hard over the past six months, appears to have originated from Russia and China before spreading in the inter-Korean border areas via North Korea, a state-run laboratory said Thursday.

The National Institute of Environmental Research (NIER), affiliated with the Ministry of Environment, issued an interim report on the transmission route of the ASF virus that has been detected from the remains of wild boars in South Korea's northern border areas since last fall.

ASF started to spread in Georgia, a European country, in 2007, and was transferred to central Russia in 2017 and then Asia, including China, Mongolia and Vietnam, from 2018. The virus cannot infect humans, but its fatality rate reaches nearly 100 percent when pigs and related animals are infected.

South Korea has so far reported 604 confirmed ASF cases since its first-ever outbreak of the deadly animal disease occurred on Oct. 2 last year. The local authorities have culled more than 400,000 domestic pigs as part of preventive measures. 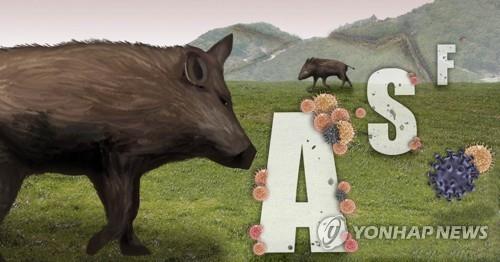 NIER researchers said they estimated the transmission route of the ASF virus from the fact that the virus genotype found from domestic wild boars is the same as the virus that has been prevalent in Russia and China after originating from Georgia in 2007.

The genotype of North Korea's ASF virus has yet to be known internationally. But Pyongyang has officially reported to the World Organization for Animal Health that ASF infections occurred at a pig farm near the Yalu River, close to China, on May 30 last year.

For that reason, the NIER researchers speculated that North Korea may have played an intermediary role in spreading the Georgia-type ASF to South Korea. Most of the early ASF infections in South Korea were reported from its border areas located less than 1 kilometer south of the inter-Korean border, they noted.

Some confirmed cases have occurred in locations about 7 to 33 km away from the border, but they may have been transmitted via humans or vehicles, they said, adding further research and analyses will be conducted to identify the exact virus transmission route.

African swine fever in Korea seems to originate from Russia and China: report

African swine fever in Korea seems to originate from Russia and China: report