SEOUL, May 7 (Yonhap) -- Since football's K League 1 introduced the current promotion-relegation system in 2013, the opening match has always pit the reigning league champions against the FA Cup holders from the previous year.

Jeonbuk Hyundai Motors have been featured in four of the past seven years to lead all clubs. As the three-time defending champions, they will make their fifth season-opening appearance Friday at 7 p.m. against the reigning FA Cup winners Suwon Samsung Bluewings. The match is at Jeonju World Cup Stadium in Jeonju, 240 kilometers south of Seoul.

Dating back to 2013, Jeonbuk have not lost their first match of the season. They had won six in a row from 2013 to 2018 before getting held to a 1-1 draw by Daegu FC. During the promotion-relegation era, no club has won more matches on the opening weekend than Jeonbuk. 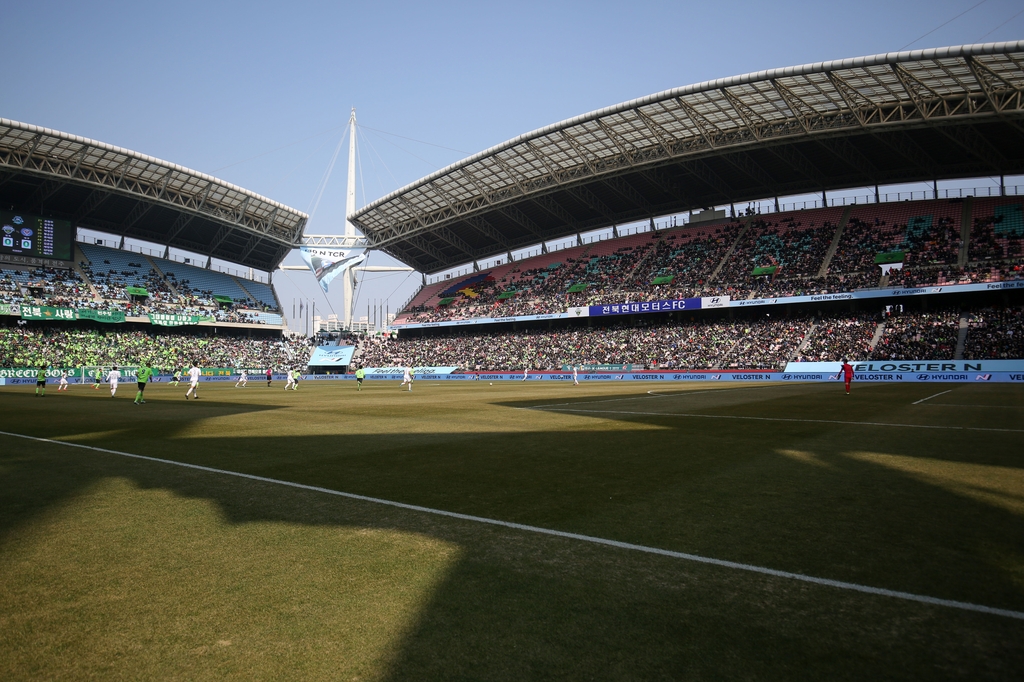 On the flip side, Incheon United (four draws and three losses) and Daegu FC (one draw and three losses) are still chasing the first wins at the start of a season. As fate would have it, these two teams will clash at 4:30 p.m. Saturday in Incheon, 40 kilometers west of Seoul.

The player who has scored the most goals on the opening weekend no longer plies his trade in the K League 1. Kim Shin-wook, currently with Shanghai Shenhua, scored four career goals in his first match of the season, one each in 2013, 2014, 2016 and 2017. The first two came with Ulsan Hyundai FC, and Kim scored the latter two in a Jeonbuk uniform.

FC Seoul and Suwon, who have formed a defining rivalry, holds the record for the biggest crowd for an opening match. In 2017, FC Seoul hosted Suwon before 34,376 fans at Seoul World Cup Stadium.

That record will not be touched this year. Because of COVID-19 concerns, matches in the early portion of the season will be played without fans in the stands.