SEOUL, May 7 (Yonhap) -- A Seoul family court on Thursday began hearing a civil case filed by the ex-husband of Gerhard Schroeder's South Korean wife against the former German leader.

The South Korean man, whose identity was withheld, filed the lawsuit in 2018 seeking 100 million won (US$81,708) in compensation, claiming Schroeder is responsible for the destruction of his marriage with the woman, Kim So-yeon.

On the first day of the trial, the attorney for the ex-husband said the extramarital relations between Schroeder and Kim were the cause of their divorce in 2017.

The man alleged they divorced by mutual consent on condition that she end her relationship with Schroeder. But Schroeder and Kim tied the knot the following year. 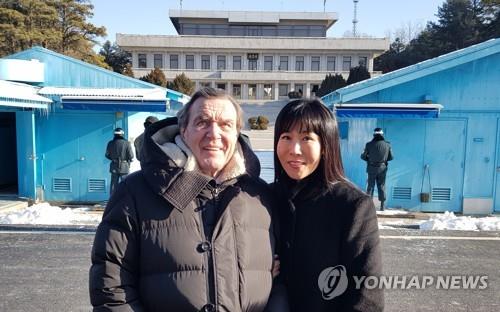 The representative of the former German chancellor countered that the relationship had nothing to do with the breakup.

The representative said Schroeder and Kim had been in business relations for a considerable period of time and the plaintiff has yet to prove when their relationship began to affect the marriage.

The ex-husband's representative responded by citing media interview in which Kim said there was a change in relations with Schroeder in the spring of 2017 and that she became confident in their romance in the summer of the year.

Kim earlier said she had lived separately from her ex-husband for several years before divorce.
(END)