The 29-year-old man from Yongin, south of Seoul, wasn't aware of his infection status while visiting the clubs last Friday, the authorities said, but started to suffer from a high fever and diarrhea the next day.

The Seoul city government and the Korea Centers for Disease Control and Prevention (KCDC) have been tracing the patient's possible contacts, up to an estimated 2,000, over the span of the six-day holiday here.

Last Thursday, the first day of the holiday, the man, who reportedly works for a software company in Seongnam, just south of Seoul, traveled with three friends around the city's Songpa area, Gapyeong in Gyeonggi Province and Chuncheon and Hongcheon in Gangwon Province. 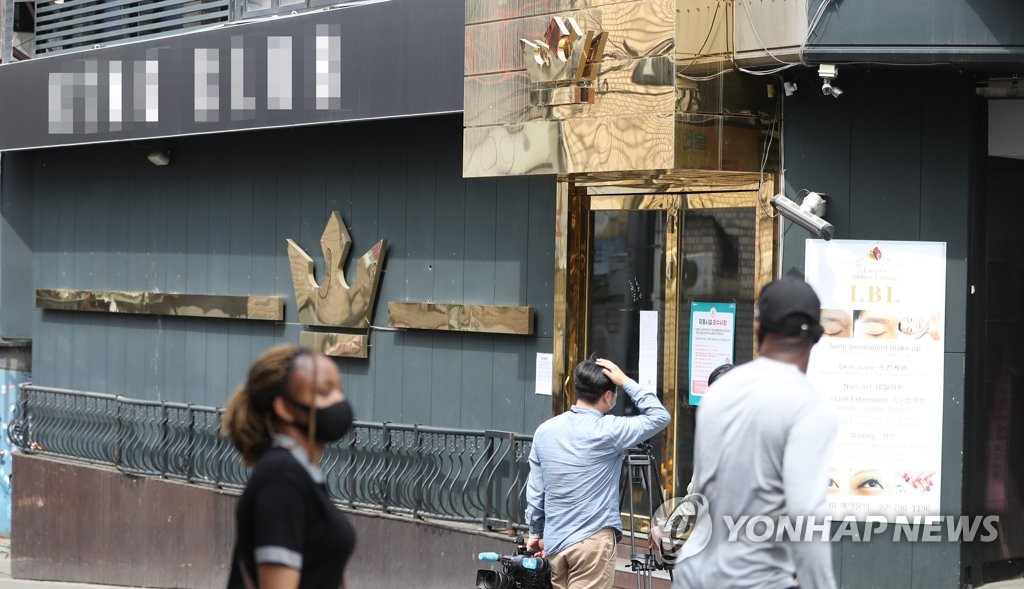 On Friday night, he went to clubs in Itaewon, Seoul, with a friend, who later tested positive and was one of the three he had traveled with the previous day. The two spent time at five clubs in Itaewon until the wee hours of Saturday.

King Club, the only one identified among the five, confirmed the two individuals' visit on its social media account. The club, known as a gay bar, said it complied with the government's quarantine orders by checking guests' temperatures, keeping an entry log, allowing in guests with face masks and offering hand sanitizers.

The city and the KCDC have launched an on-site investigation to find out their contacts to stem the spread of COVID-19. The man's five close contacts have so far tested negative, and his friend was asymptomatic at the time of his positive test result, according to the authorities.

A health expert who asked not to be named voiced concern that visitors to the gay club might be reluctant to reveal their identities and come forward to get a test, possibly allowing the virus to quietly spread.

The man took a taxi around 4:40 a.m. on Saturday to arrive at his Yongin home. At 4 p.m., he went out to eat dinner and came back home in his friend's car. On Sunday, he made a visit to a hospital and a pharmacy, and he stayed at home all day on Monday. On Wednesday morning, he tested positive for COVID-19 and was admitted to a hospital in Suwon, south of Seoul.

The authorities believe his case is one of community transmission, as he has no recent history of travel overseas and has had no known contact with any confirmed patient. The authorities have also identified the man's 43 close contacts at his company and tested them for the virus.

Coronavirus patient found to have visited 5 clubs in Seoul's Itaewon

Coronavirus patient found to have visited 5 clubs in Seoul's Itaewon