SEOUL/WASHINGTON, May 7 (Yonhap) -- Defense cost-sharing talks currently under way between South Korea and the United States need to be viewed as being reasonable by all sides, Seoul's foreign ministry said Thursday.

In a regular briefing session, foreign ministry spokesperson Kim In-chul said that while both Seoul and Washington want a fair and equitable arrangement, there are differences in perspective, hinting that the United States may have forwarded a new proposal that has not been accepted by its ally.

The official declined to comment on media reports that claimed the U.S. offered a new proposal calling for raising Seoul's contribution to US$1.3 billion.

In Washington, a U.S. State Department spokesperson also declined to confirm the cited figure but reiterated the U.S. commitment to a mutually acceptable agreement.

"Despite the efforts of both sides, the United States and the Republic of Korea have not reached agreement on an equitable burden-sharing agreement," the spokesperson said. "While we will not publicly confirm or offer comment on discussions between allies in diplomatic channels, our longstanding view is the Republic of Korea can and should contribute more of its fair share.

"During the course of negotiations, we have adjusted and compromised. We have shown significant flexibility in recent weeks in order to reach a mutually acceptable agreement. We're looking for further compromise from the Republic of Korea Government as well," he said.

Sources said that after U.S. President Donald Trump in March rejected a 13 percent increase in cost-sharing contributions by South Korea compared to 2019, Washington may have lowered the initial $5 billion payment request and opted for something less.

Trump has argued South Korea needs to pay more for its own defense under the Special Measures Agreement (SMA).

Others familiar with the talks said that despite numerous negotiations, the allies have yet to reach a deal on renewing the terms for Seoul's share of the cost to maintain some 28,500 American troops stationed on its soil.

The previous SMA expired at the end of last year, in which Seoul agreed to pay about $870 million. The absence of a new cost-sharing deal has led the U.S. Forces Korea to place some 4,000 Korean employees on unpaid leave since April 1. 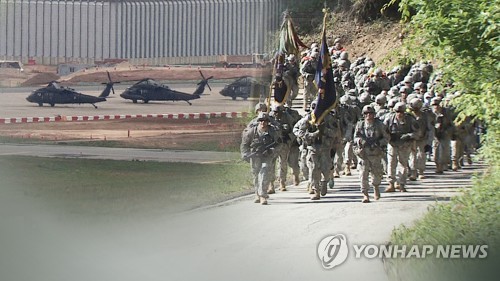