SEOUL/NEW DELHI, May 8 (Yonhap) -- LG Chem Ltd., South Korea's leading chemical firm, said Friday there was no second gas leak at its plant in India, a day after a leak of toxic gas killed 12 people.

LG Chem said it has asked Indian police to evacuate residents near the LG Polymers chemical plant in the southern Indian state of Andhra Pradesh due to concerns over the rising temperature of a tank of gas.

LG Chem's response came hours after Reuters reported there is a wider evacuation as gas began leaking again from the LG Chem plant. 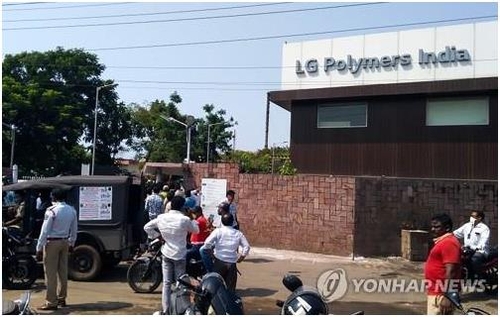 People in a 5-kilometer radius of the plant were being moved out, Reuters said, citing N. Surendra Anand, a fire officer in the Visakhapatnam district, where the plant is located.

On Thursday, LG Chem said the gas leak has been brought under control and that the company is taking all steps to ensure affected people can swiftly receive medical treatment.

Local authorities said that some 10,000 people have been evacuated, with about half suffering from breathing problems and stinging eyes. About 800-1,000 people were treated at hospitals, with most having been released, and the 20 people placed in intensive care were known to be in stable condition.