SEOUL/YONGIN, South Korea, May 8 (Yonhap) -- Thirteen more cases of the novel coronavirus were confirmed Friday, associated with a patient who visited clubs and bars in Seoul's popular multicultural neighborhood of Itaewon.

The Korea Centers for Disease Control and Prevention (KCDC) said in a briefing that 14 of the patients' contacts, including three foreign nationals and one army officer, have so far tested positive for COVID-19.

Early in the morning, a 31-year-old co-worker of the patient was confirmed to have the virus. The two work in the same IT company based in Seongnam, Gyeonggi Province. The man, a Yongin resident, has been admitted to a hospital in Anseong in the same province.

The patient, whom health authorities consider is a case of community transmission, traveled to parts of the country and visited five clubs and bars in Itaewon over the weekend. 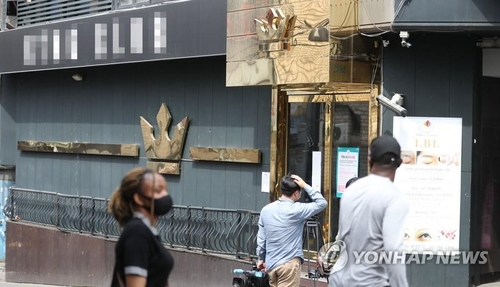