CJ CGV said in a regulatory filing that it lost 118.6 billion won (US$97.3 million) in the January-March period, compared with a net loss of 8.6 billion won a year earlier.

Yet, the first-quarter net loss was smaller than a shortfall of 213.5 billion won recorded in the previous quarter.

Revenue nose-dived 47.6 percent on-year to 243.3 billion won in the first quarter. The company posted an operating loss of 71.6 billion won, compared with a profit of 23.5 billion won a year ago. 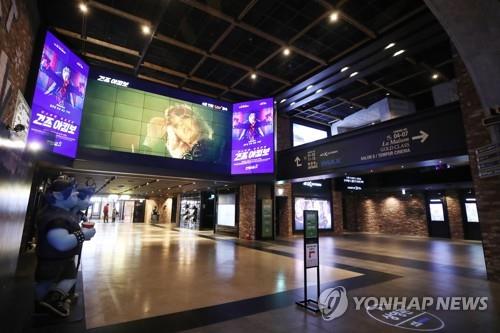 CJ CGV attributed the worsened first-quarter performance to a tumble in the number of moviegoers following the COVID-19 outbreak.

The theater chain said the number of its domestic customers plunged nearly 53 percent on-year in the first quarter, with sales sinking about 48 percent to 127.8 billion won.

The coronavirus pandemic also battered CJ CGV's overseas operations, with its revenue in China plummeting 85.6 percent on-year to 15.8 billion won. The company has closed its cinemas in China since Jan. 24.

In a board meeting Friday, CJ CGV decided to conduct a rights offering of 250 billion won in a preemptive bid to secure liquidity and improve financial health to brace for the long-term impact of the coronavirus crisis.

Shares in CJ CGV slumped 6.61 percent to close at 24,000 won on the Seoul bourse, far underperforming the broader KOSPI's 0.89 percent gain. The earnings results were announced before the market closed.
(END)