SEOUL, May 8 (Yonhap) -- A Seoul court on Friday found four civic group members guilty of trespassing at the site of the THAAD missile defense system in a reversal of an earlier ruling.

The Seoul Northern District Court sentenced the activists to six months in jail with a stay of execution for two years in a retrial of the case, saying freedom of expression could not justify the intrusion.

In March, the Supreme Court sent the case back to the appeals court citing possible misjudgment in its acquittal of the four activists for trespassing.

The activists were indicted on charges of illegally entering the site in Seongju, about 300 kilometers southeast of Seoul, in September 2017, where the Terminal High Altitude Area Defense (THAAD) battery is set up.

They circumvented a wire fence, using blankets and gloves, to reach the site where they staged a vocal protest against the deployment of the U.S. defense system.

In the first trial, they were found guilty of making an illegal entry into the off-limits security area. They were given a six-month sentence with a stay of execution for two years.

The judges of the second trial, however, interpreted the relevant law more narrowly to conclude they did not actually break into a "building" as the battery is installed outside.

"The THAAD site is controlled by the military with wired fences to protect it from outsiders," the court that retried the case said Friday. It noted that the Supreme Court also concluded the site constitutes a building. 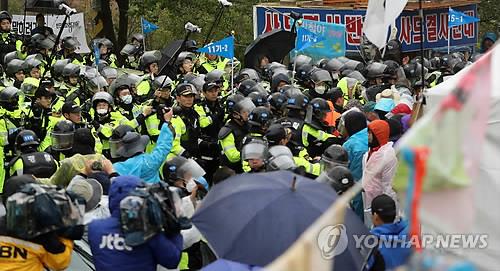