SEOUL, May 8 (Yonhap) -- South Korea has no room for additional flexibility in its deadlocked defense cost-sharing talks, a diplomatic source said Friday, renewing Seoul's calls for Washington to agree to a "reasonable" deal.

The remarks came after a senior Trump administration official confirmed Thursday the United States has asked South Korea to pay US$1.3 billion a year -- an increase of about 50 percent from the previous year -- for the stationing of the 28,500-strong U.S. Forces Korea (USFK).

"No. We have already done our best within our capacity," the source told Yonhap News Agency when asked if Seoul has any room for flexibility to go beyond its latest offer of a 13 percent increase in the cost-sharing deal, called the Special Measures Agreement (SMA).

"Our position remains the same: If they are willing to reach an agreement at a reasonable level, we are ready anytime," the source added.

The U.S. official told Yonhap that Washington's demand for $1.3 billion was its "final offer" and "quite reasonable," as it represents a cutback from its initial demand of $5 billion. The remarks followed repeated claims by Washington that it has been flexible.

Seoul officials have doubted the claims of flexibility, as they believe the U.S. pared down its demand from an amount that it viewed as "unrealistically high."

"They are talking about flexibility on their side, asking a question of what South Korea has done. But that is dismissive of the trajectory of the negotiation," the source said.

"We have been consistent under our principles that the negotiations should proceed within the reasonable, 'common-sense' scope, and our stance remains unchanged," the source added.

Last week, Foreign Minister Kang Kyung-wha told parliament that a 13 percent increase from last year's deal was the highest offer Seoul can make. Under the 2019 SMA, Seoul agreed to pay about $870 million.

Trump has already rejected South Korea's latest proposal, saying Seoul should pay "for a big percentage of what we're doing" there. Despite the ongoing negotiations, Trump also said Thursday that Seoul has agreed to pay "substantial money."

As both Seoul and Washington appear to have drawn battle lines, casting their latest proposals as the final ones, concerns are growing that the impasse could be prolonged despite its potential impact on the allies' security operations.

Due to the absence of a deal to fund wages for thousands of South Korean USFK employees in nonessential positions, they were forced to go on unpaid leave last month, apparently hampering the USFK's day-to-day operations.

Seoul's top negotiator Jeong Eun-bo and his U.S. counterpart, James DeHart, last met for face-to-face negotiations in Los Angeles in March, but they failed to seal a deal. They have since communicated by email and phone due in part to the logistical challenges stemming from the new coronavirus. 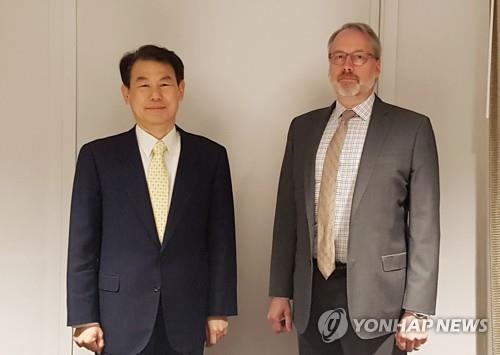 S. Korea has no room for more flexibility in defense cost-sharing talks with U.S.: source

S. Korea has no room for more flexibility in defense cost-sharing talks with U.S.: source