SEOUL, May 9 (Yonhap) -- LG Polymers India, an affiliate of South Korean chemical giant LG Chem Ltd., on Saturday expressed condolences over a gas leak that killed 12 people as it vowed to provide an effective care package for the victims.

LG Polymers India said it has created a special task force to help victims and families to resolve any issues and provide assistance to the bereaved families.

"LG Polymers India would like to express our deepest condolences to everyone who has been affected and hurt by this incident, the company said in a statement. 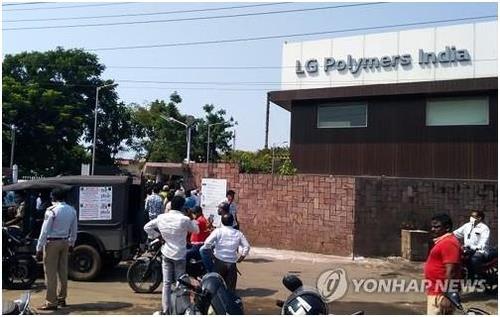 The company also said its teams are working day and night with the government to assess the impact of the damage and create concrete measures to deliver an effective care package that can be implemented immediately.

The accident took place Thursday ahead of the resumption of the plant after a lockdown imposed over the coronavirus pandemic.

The company said it is committed to working closely with the authorities in India to investigate the cause of this incident and prevent recurrence.

It added, "Our initial investigations suggest that the cause of the incident is prima facie by the leaking vapor from the styrene monomer storage tank" at its plant in the southern Indian state of Andhra Pradesh.