(ATTN: UPDATES with forecast of debt-to-GDP ratio in paras 7-10)

SEJONG, May 10 (Yonhap) -- South Korea's per capita national debt has surpassed 14 million won (US$11,500) and is expected to go up due to a spending hike meant to mitigate the economic fallout from the coronavirus outbreak, data showed Sunday.

The data posted on the website of the National Assembly Budget Office showed that the per capita national debt stood at 14.83 million won as of Saturday. In comparison, it was 2.37 million won in 2000.

The office said that South Korea's national debt stood at 769.18 trillion won as of Saturday, a sharp increase from 111 trillion won in 2000. 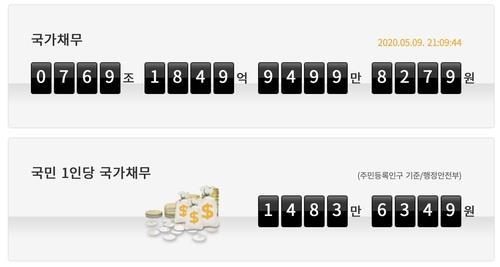 South Korea's per capita national debt could rise this year as the government is pushing for a third extra budget worth 30 trillion won in the latest attempt to minimize the economic fallout from the spread of COVID-19.

Last month, the National Assembly approved a 12.2 trillion-won extra budget to fund emergency handouts for households to cope with the economic impact of the coronavirus outbreak.

It is the second extra budget related to the fallout from the virus, following an 11.7 trillion-won one created in March.

South Korea's debt-to-GDP ratio could rise to 44.4 percent this year if the third extra budget and possible zero economic growth this year are taken into account.

The International Monetary Fund has predicted that South Korea's economy will shrink 1.2 percent this year as the global economy is expected to have its worst year since the Great Depression of the 1930s over the pandemic.
(END)