SEOUL, May 10 (Yonhap) -- President Moon Jae-in presented an ambitious vision Sunday for South Korea to take the initiative in the post-coronavirus global economy on the basis of its prowess in the sectors of information and communication technology, and bio-health.

"We will use our relatively rapid stabilization of the COVID-19 outbreak and the transition to a new normal as a turning point for enhancing economic vitality," Moon said in a special address to mark the third anniversary of his inauguration and unveil his top priority policy tasks for his remaining two years in power.

"We will blaze a trail in the post-COVID-19 era with a pace-setting economy," he said. 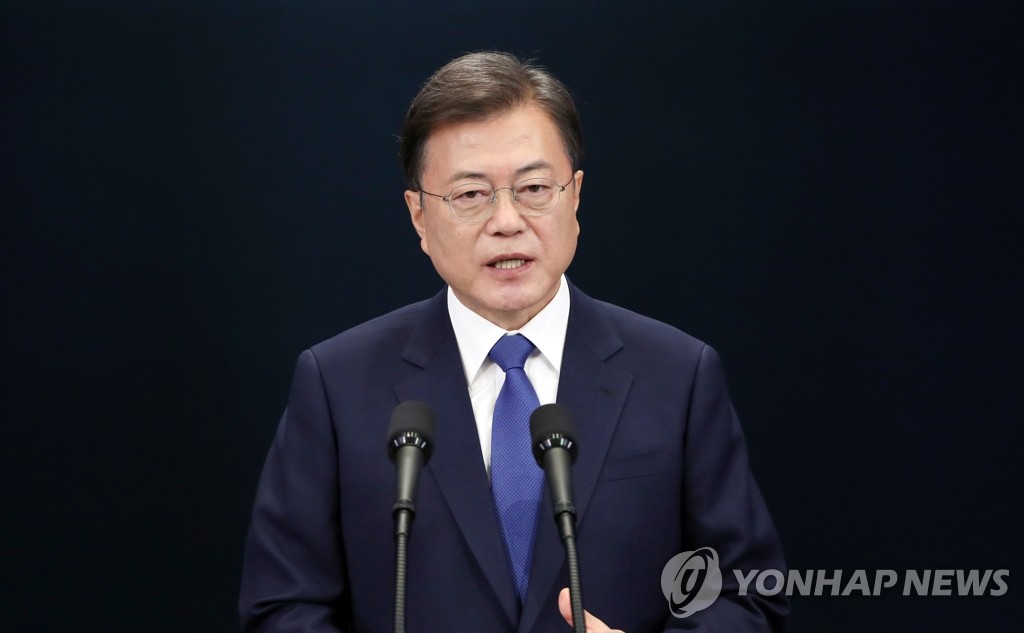 He vowed full efforts to turn ongoing crises into opportunities in a bold and aggressive way.

He used the word "lead" 11 times throughout his 25-minute speech from the Chunchugwan press room of Cheong Wa Dae.

"I will strive to pave the way for the Republic of Korea to take the lead globally," he said, using South Korea's official name.

Moon has been apparently emboldened by the success so far of the so-called K-quarantine.

But he warned: "It will be a long time before the COVID-19 outbreak has ended completely. We are in a prolonged war." He cited the newly reported infection cluster in nightspots in Seoul, which rekindled worries about a second wave of contagion.

On Sunday, South Korea reported 34 additional infections, mostly connected with a 29-year-old man who visited three nightclubs in the Itaewon district before testing positive, according to health authorities.

Still, Moon said the country should try to move forward.

"There's no reason to stand still out of fear. If we do not let our guard down, our epidemic prevention and quarantine system can fully control and manage the spread of the virus," Moon said. "We have the right quarantine and medical systems combined with experience to respond quickly to any unexpected infection clusters that might occur."

Moon emphasized that what matters is the economy.

"The world economy has ground to a halt," Moon said, comparing the current economic crisis to the Great Depression a century ago. "We are in a situation with no bottom and no end in sight. The damage to our economy is indeed colossal as well."

Moon said the government will strive to turn South Korea into a globally leading "digital powerhouse" with innovative business ventures and startups serving as the main driving force.

On the envisioned Korean version of the New Deal, Moon said South Korea will focus on a "preemptive investment" for the future, designed to establish digital infrastructure and create many jobs.

"The early establishment of 5G infrastructure and the building of infrastructure to collect, accumulate and use data will be pursued as national projects," he said. "Non-face-to-face industries related to medical services, education and retail distribution will be intensively fostered.

Moon pointed out that the COVID-19 crisis has demonstrated the importance of beefing up health care and social safety nets.

The government will also "establish the cornerstone for an era of universal employment insurance" by first enabling freelancers, contract workers and others in "blind spots" to be covered and then expanding it to all of the self-employed, according to the president.

Among the nation's 27.79 economically active population, only 13.78 million workers are covered by the system, data show. 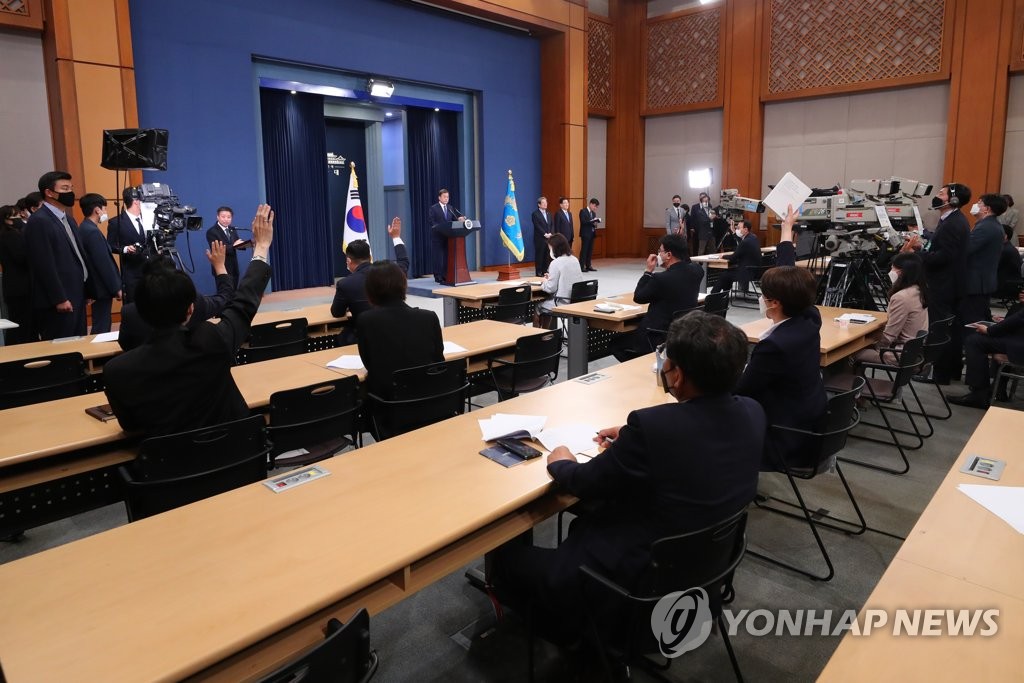 On the topic of North Korea, he proposed that the two Koreas work toward a "single community of life and a peace community by cooperating on human security."

He gave no details in the address, which he said was mainly about how to ride out the ongoing national crisis and prepare for the post-coronavirus era.

He instead expressed hope that despite a stalemate in nuclear talks, the two Koreas will carry out their own cooperation projects, such as relinking railways across the Demilitarized Zone (DMZ), turning the DMZ into an international peace zone, allowing South Koreans to make individual tours of the communist neighbor and excavating war remains together.

All the proposals remain "valid," the president said. "Still, North Korea is not responding. I think (it) is suffering various difficulties due to the novel coronavirus infection (problem)."

He added inter-Korean and Washington-Pyongyang "communication" has not been severed, albeit not as brisk as before, as they are "confirming mutual trust and commitment to dialogue."

What's suggested by Seoul won't be subject to the U.N. Security Council sanctions on Pyongyang or could be eligible for a sanctions waiver, he said.

In particular, Moon added, quarantine partnerships against the coronavirus, as well as animal diseases like African swine fever, could serve as a starting point.