SEOUL, May 10 (Yonhap) -- President Moon Jae-in suggested quarantine cooperation with North Korea on Sunday as a viable way to jump-start a broader range of inter-Korean cooperation projects, saying it would not breach international sanctions on Pyongyang.

Speaking to reporters after a special address marking the third anniversary of his inauguration, Moon pointed out that the two Koreas share the 248-kilometer-long Demilitarized Zone (DMZ) as a land border, a potential transmission route.

"It is worth pushing actively as a priority because it does not infringe upon U.N. Security Council sanctions, and contributes to hygiene and health of all people both in the South and the North," Moon said of coronavirus cooperation.

Moon's offer of inter-Korean quarantine cooperation was not new, and his latest remarks reflected a sense of urgency over joint efforts amid growing concern about a "second round of pandemic."

He stressed that a string of cooperation proposals that Seoul has made so far, including those related to an inter-Korean railway connection and individual tours to the North, remain "valid." Among other envisioned programs are turning the DMZ into a U.N.-led peace zone and excavating war remains together.

"Still, North Korea is not responding. I think (it) is suffering from various difficulties due to the novel coronavirus infection (problem)," he said. 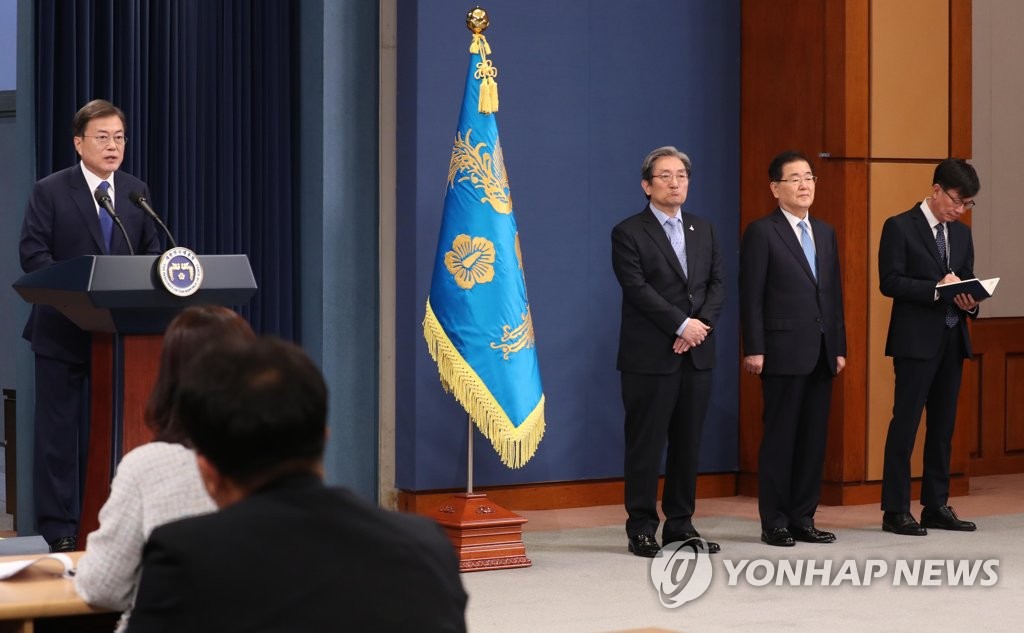 The president vowed a continued push for persuading Pyongyang to accept the offers.

He reaffirmed plans to seek inter-Korean projects in a preemptive way amid a drawn-out stalemate in denuclearization talks.

What's suggested by Seoul won't be subject to the U.N. Security Council sanctions on Pyongyang or could be eligible for a sanctions waiver, he added

Moon, meanwhile, said inter-Korean and Washington-Pyongyang "communication" has not been severed, albeit not as brisk as before, as they are "confirming mutual trust and commitment to dialogue."