SEOUL, May 11 (Yonhap) -- A new batch of the South Korean Navy anti-piracy unit Cheonghae left for waters off Somalia Monday as part of a rotational deployment, the Navy said.

The 300-member contingent departed from the southern port city of Busan on the 4,400-ton Dae Jo Yeong to conduct missions in the Gulf of Aden and the Hormuz Strait for six months starting in June, according to the Navy.

It is the 32nd batch since the Cheonghae Unit was first deployed in 2009 to help with global efforts to tackle piracy off Somalia. In January, South Korea decided to temporarily expand its mission areas to include the Strait of Hormuz following a U.S. request to help protect the key waterway.

In order to prevent the new coronavirus from penetrating the destroyer, all service members have stayed on board for the past two weeks, maintaining a readiness posture. They have all tested negative for the virus in two rounds of testing that took place in late April and early May, the military said.

"I express gratitude to the service members of the 32nd batch for devotedly preparing for the overseas missions despite difficult circumstances, such as to prevent the spread of COVID-19," Chief of Naval Operations Adm. Boo Suk-jong said. 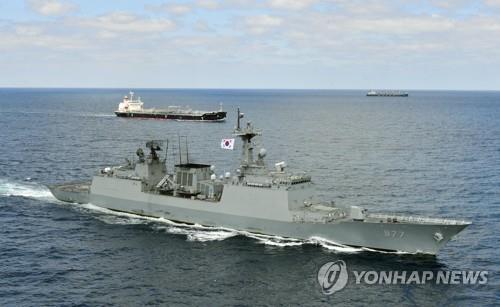