ANDONG, South Korea, May 11 (Yonhap) -- Police said Monday they have apprehended a new key suspect allegedly involved in the so-called Nth Room case, in which dozens of people were exploited to perform gruesome sex acts that were filmed and distributed through online chatrooms.

The cyber safety department of Gyeongbuk Provincial Police Agency said they have apprehended a 24-year-old male university student who confessed to using the alias "God God" in the chatrooms, and have filed a request with a court for his arrest.

The chatrooms, which ran on messaging service Telegram, were operated as a pay-to-view online club for sexually explicit videos. Known to have some 260,000 users, videos of at least 74 people, including 16 underage girls, were believed to have been distributed through several chat rooms.

The man is believed to have first opened such a chatroom on Telegram. He was brought in for questioning on Saturday after police identified him as the person behind the "God God" ID.

Police said they took him into custody after he confessed being the owner of the ID.

"We apprehended the suspect after analyzing various digital evidence," said a police official involved in the case.

Police said they will soon decide whether to reveal the identity of the suspect in the high-profile sex crime case.

Authorities have so far revealed the identities of three other key co-conspirators in the case: Cho Ju-bin, Kang Hun and Lee Won-ho.

Cho, 24, was indicted for allegedly blackmailing women into providing sexual videos to the illegal Telegram chatroom. At least 25 people, including eight underage girls, have been confirmed to have been exploited by Cho.

More than 140 others have also been apprehended in relation to the case.

"As the investigation is ongoing, we will have further briefings when an arrest warrant is granted," police said. 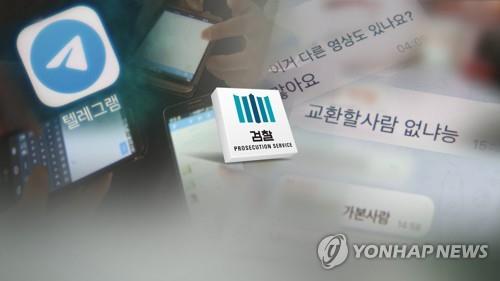