SEOUL, May 11 (Yonhap) -- Korean Air Lines Co. will decide this week on whether to sell 1 trillion won (US$820 million) worth of stocks as part of self-help measures amid the growing coronavirus impact on the airline sector, industry sources said Monday.

Korean Air plans to hold a board meeting Wednesday to determine the exact size and the schedule of the rights issue, an airline official told Yonhap News Agency over the phone.

Shareholders of the country's biggest carrier will be given the rights to buy the stocks to be issued. 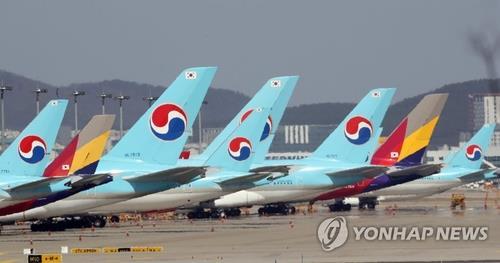 Korean Air's parent Hanjin KAL Corp. is expected to inject about 300 billion won into the national flag carrier given that it owns a 29.96 percent stake in the carrier.

The capital increase under consideration is one of the options that Korean Air reviews to ride out the coronavirus crisis, the company said.

As part of self-rescue efforts, Korean Air had 70 percent of its 20,000-strong workforce take paid leave for six months starting Thursday and is in the process of selling non-core assets to secure cash.

On Thursday, Korean Air asked Credit Suisse (CS) to provide consulting services on the reorganization of its business units in return for a planned capital injection of 1.2 trillion won from two state lenders -- the Korea Development Bank and the Export-Import Bank of Korea.

Korean Air is set to report poor first-quarter earnings results this week, and an earnings shock is likely for this year if the coronavirus outbreak prolongs throughout the year.